The Journey of Samira

“The journey of Samira” is an illustrated book, without any text because the images speak for themselves. It is a solidarity project that aims to raise awareness: in this case, to awaken our human side to the horror of thousands of children and their families who escape from the war.

Well now, since we will be able to pay for the printing of the book and bank and Verkami fees, ALL MONEY THAT REACHED MORE THAN THE TOTAL COSTS will be given directly to the FAMILIES who have already arrived, to PROACTIVA OPEN ARMS and to MICRÓPOLIS SOLIDARITY GROUP.

THE MORE MONEY WE RECEIVE, THE MORE HELP WE CAN SEND !!

On January 26, 2016, I saw on TV3 a terrifying report: To Kyma. Rescue in the Aegean Sea by Arantza Díez, David Fonseca and Sergio Montesinos. Oscar Camps, and his team, a group of life guards and rescuers from Badalona, were reporting their experience trying to save the lives of people who fled from the Syrian war.

I was so shocked that I thought I had to do something. But I'm neither a lifeguard, nor a doctor, nor a nurse, nor a fireman ... What could I do?

The next morning I woke up with these words in mind: An illustrated book.

A book that impresses us so much that we were willing to go find these families who flee from the horror and help them to rebuild their lives in Europe.

After the report, I thought: "Let’s not allow our leaders to hide our most human face; let’s do not buy their fear; we could be the next”

And here everything started .... 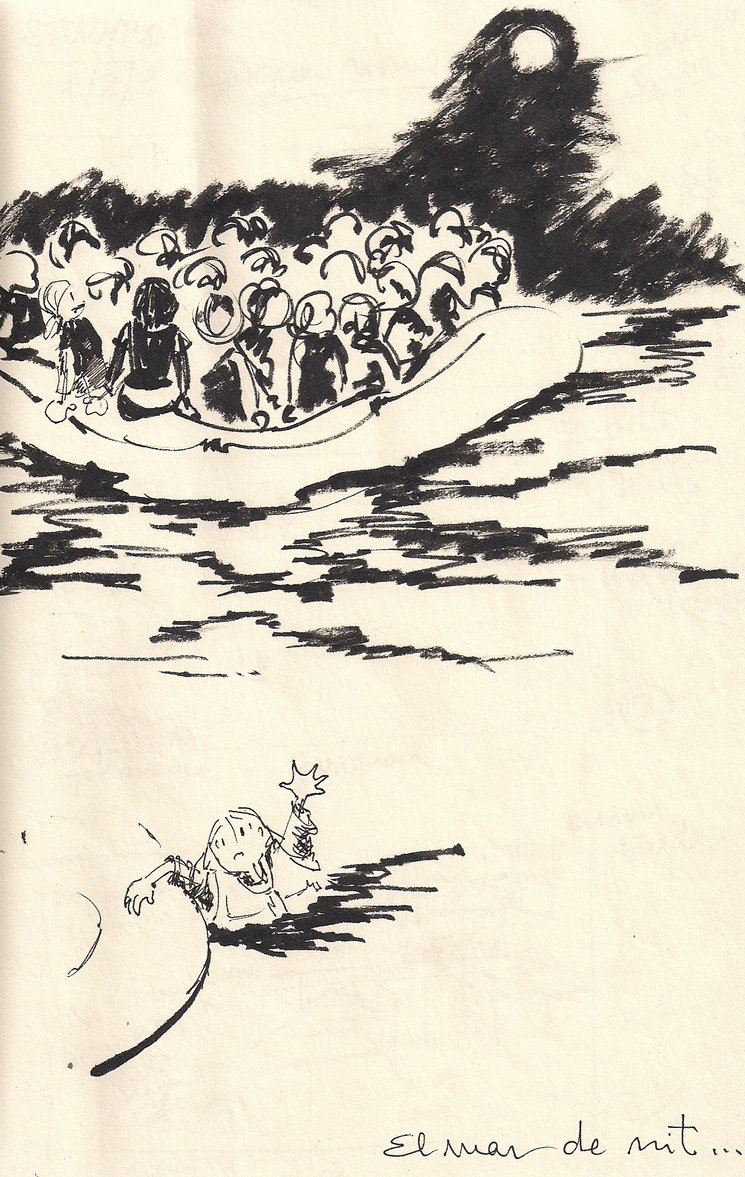 At first, I asked Imma Llonch, author and publisher of the stories of the collection "Els marrecs de Montbrú" ( "The kiddies of Montbrú") to write the text of this book.


I told her the story I was imagining: the experiences of a girl who runs away from the war, traveling by foot through endless paths; crossing the deep waters of a sea in small boats overfilled; the fear of falling into the water and the fear of drowning; the losses; resignation. The fear ... and our own fear that the arrival of so many people could risk the status of welfare....

Finally, it was Imma who found the ultimate structure of this book.

A mirror, she told me. Two parallel stories : one girl, there (Samira), who is escaping from the horror and the other girl, here (Maria), who becomes aware of all that is happening.

THAT IS THE REASON WHY THERE IS NO TEXT; THE IMAGES ARE IN CHARGE OF EXPLAINING THE HISTORY TO US.

Without the intention to do so, we have created a book that CAN CROSS BORDERS, WHICH THE WHOLE WORLD CAN READ. For that to happen, WE NEED YOU ALL.

The aim of this book is to help individuals that are RUNNING AWAY from their countries due the horror that entails a WAR.

Help girls like Samira and her family since it could be any child and any family in any part of the world where there is a war that could be affected.

For this reason, I want to assign ALL the amount of the sale of these 1.000 copies which you will help me to publish, to these families and to these children.

Straight to them and to some of the NGOs working directly in the field.

These are the NGOs whose we want to work with

PROACTIVA OPEN ARMS, Catalan NGO that deals with saving human lives in the sea. Created in October 2015, its first action was the settlement in Lesbos of a group of volunteers to help the Syrian refugees who were trying to reach the island and not to die during the journey.

Currently, they are sailing the Mediterranean on the Astral, a rescue boat that is already too small because of the immense wave of people who throw themselves into the sea with the hope to find a better life in this side of Europe.
Proactiva Open Arms

MICRÒPOLIS SOLIDARITY GROUP, a group of Catalans and Spaniards working in Greece to improve the situation of refugees. They promote and act as intermediaries for Greek families to shelter the most vulnerable refugee families who are living in militarized camps in poor conditions (especially after the dismantling of the camps in Idomeni and Thessaloniki).
Micropolis Solidarity Group

Anything beyond this figure will go directly to THE FAMILIES WHO HAVE ALREADY ARRIVED HERE, to PROACTIVA OPEN ARMS and to MICROPOLIS SOLIDARITY GROUP.

From the very first minute, I felt that this was a shared project and the more I would spread it, the more it grows. So I started talking to my family, friends and neighbors, and many ideas were born to collaborate…. and the encouragement!

I am lucky to be a friend and neighbor of La Rateta que escombrava l'escaleta (a fantastic group of musicians who describes themselves as cabaret-clown).

The project is already in print. At first, we have decided to print 1.000 copies. We need to reach the Verkami in order to pay for the printing. If we get over 2,000€, the surplus will go to a second, third or more printings to keep helping families.

The book will be completely finished at the end of this Verkami campaign.

This means that you will have the book at the picking points from December 14th onwards. Or you will receive it by mail during the same dates (depending on your choice).

We will also held some presentations of the book, for the time being in Catalunya. And we will have the performance of "La Rateta que escombrava l'escaleta" singing their song.

We will announce all presentations, as well as the new picking points that will be opened. At the moment we have one in each province of Catalunya.

Over all, share and spread the project!!. Your help is essential to succeed in this project. 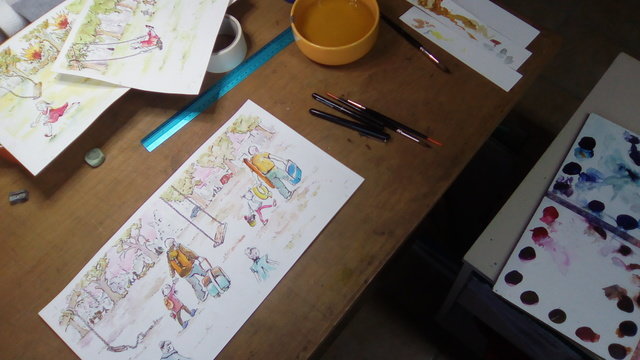