"Mesa para 2" is an exclusive restaurant that merges with everyday life on the streets. Its inside is adaptable and is, for example, a hairdresser or a toy shop. Outdoors, the 9 workers build up their kitchen, a big transparent bubble from where they also serve an aerial table fixed to a wall.

Special mention on our website and on our promotional material

Special mention on our website and on our promotional material
+ Invitation for 2 persons to A Dinner Mesa Para 2
+ 1 bottle of special “Mesa para 2” wine.

MESA PARA 2: The Project
“Mesa para 2” is a theatrical and culinary experience in a restaurant of exceptional category. “Mesa para 2” dives into the poetics and details created in intimate spaces and the craziness and improvisations that come along when playing on the streets.

“Mesa para 2” is a restaurant of extraordinary category where guests are only admitted à deux. One month before the grand opening, people can already call the maitre Jiuliuz to reserve a table. They will find out about it through local newspapers and other announcements.

However, on the day of the opening, nothing turns out to be as the restaurant’s staff had hoped for. They have already prepared everything for the opening when they have to spend all the money that is meant for the restaurant because of a serious family issue. Consequently, they cannot pay the rent anymore and are thrown out on the street, penniless.

But hope and creativity let them have a brilliant idea: They will set up their restaurant anyhow, anywhere. They look for a new place, any kind of place: a hairdresser’s, a clothes shop, a toys shop or any kind of place where they might be allowed to set up their restaurant. They knock at the neighbours’ doors and ask for permission. In the beginning in vain, until, finally, one shopkeeper leaves his premises to them. In a fast choreography they set up a mini-version of their restaurant: 4 tables for 4 couples.

On the street they set up the kitchen: an inflatable, see-through plastic bubble inside of which the cook and his apprentice are going to prepare their exclusive dishes. They also build up a very special additional table, an aerial table that is fixed to the facade of a building, where two clients will have the opportunity to eat closer to the stars.

The 9 workers of “Mesa para 2” speak many languages because they come from different parts of the world (Russia, Italy, France, Catalonia). Their service is exclusive and each table has its own waiter or waitress.

Inside the restaurant, everything seems perfect and at its best but outside, on the streets and inside the kitchen, the audience will discover the characters’ worries, problems, relationships and dreams. 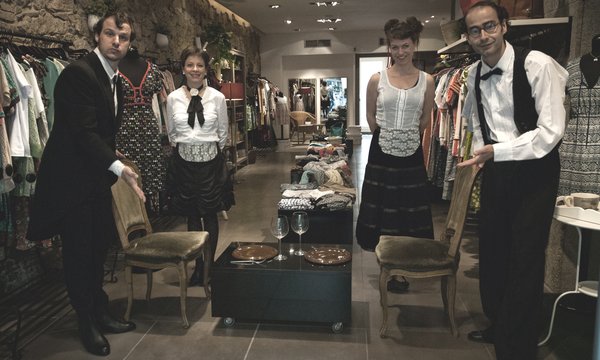 We are a collective of 9 artists that met for the first time in a workshop on humour and creation in unconventional spaces held by Sergi Estebanell in 2010 in Barcelona. Since then, we have created various interventions and artistic projects for singular spaces:

• RED (Span. for “net”), an intervention with 8 red cars and 16 persons in a roundabout to be watched from a 100 meters distance, in this case from the volcano in Olot (Festival Panorámica 2011).

• A HOLY PLAYGROUND, a transdisciplinary performance playing with the conventions and spaces of an Austrian church, which was realized with local artists in Graz in 2011.

• CAUSALITATS, an “invisible intervention” in a town’s market, playing on the border between daily life and theatre (Festival Itineràncies, Prats de Lluçanés).

All these projects have been especially created for each location. With “Mesa para 2”, we want to take a step further, take more time and create our first long-time project, which will officially premier at Fira Tàrrega in 2014. 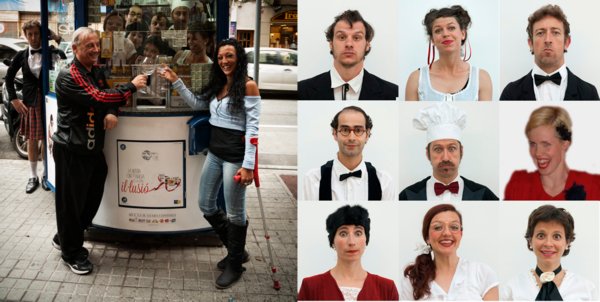 What we are going to do with your money

As you might have noticed, “Mesa para 2” is a quite ambitious project that requires a lot of time, work and money. We are more than a year ahead of premiering and we have already invested a lot of time in creative residencies to work on the characters and some of the scenes.

Now we need your support in order to be able to construct our kitchen-bubble and to tailor the costumes for the characters.

But we also try to get money via co-productions of theatre festivals in Europe but for now the project lives of the financial and temporal investments of co.LABse.

From Fira Tàrrega, one of the most important street theatre and showcase festivals in Europe, we have been guaranteed residencies in 2014 (which means food & accommodation) and the premier at the festival in the same year.

In case we reach the 3000€, please don't stop giving money to the project because we need much more than the 3000€ for it. Thank you!

We invite you to enjoy a dinner hosted by the characters of Mesa para 2.

Come and enjoy our delicious menu, live a different kind of experience and share the craziness of our characters.

Dinners can be booked between November 2013 and the official premier of the show at “Fira Tàrrega”in September 2014.

Dinners will be served in Barcelona and Girona (Catalunya) and Graz ( Austria ).

The artists of “Mesa para 2” will hold different workshops and you are offered you one place in the workshop of your choice. Workshops taking place between November 2013 and September 2014.

For now, we have made short residencies in Cal Gras, Avinyó (“Mesa para 2” was selected for the residency programme Testimonis Escènics 2013) and Barcelona. We have been creating the characters and some first scenes.

On June 1st we organized a co.LABse party in Poblenou, Barcelona, to present the project and totry out the characters in a real situation with an audience.

At the end of July 2013 we would like to start to build our culinary bubble and work with the 3 spaces (inside-streets-bubble).

In September and October we will work on and polish the first half hour of the show, which will premier on October 13th in Sallent, Catalonia, where we will also make recordings for a promotional trailer. In these months, we will also serve the theatrical dinners for our supporters in Catalonia.

In November and December we hope to define a list of interested co-producers and festivals that might want to buy the show for 2014. We also plan to build and buy all the missing scenographic elements, including the aerial table at the end of the year. In these months we will prepare the dinner for our supporters in Austria (Graz).

During the spring months of 2014, we are going to make artistic residencies in Tàrrega, where we will define the show and work on the connection between the four “stages” or places we use (inside, streets, bubble, aerial table) in order to have the show finished at the beginning of June.

For summer 2014 we are looking for pre-premiers in smaller festivals before the official premier in September 2014 at Fira Tàrrega, the international showcase and street theatre festival. 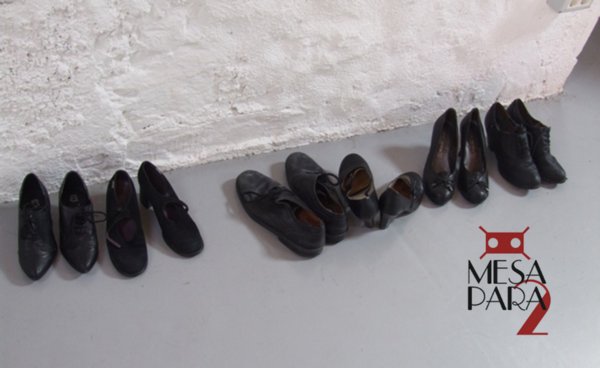 millions of thanks to all the contributors and word-spreaders. thanks to you, our crowdfunding capaign, which has just finished, has been a complete success.

soon we will be able to blow up our kitchen bubble and be pleased as punch. our craftsman of inflatable objects will have it finished by september 10th.

we will get in contact with you because of the dinners and workshops in the second half of september.

til then, cheers to all of you, again, from 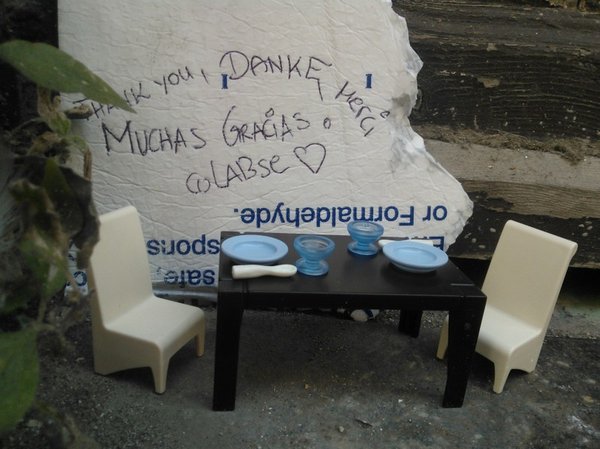 Special mention on our website and on our promotional material

Special mention on our website and on our promotional material
+ Invitation for 2 persons to A Dinner Mesa Para 2
+ 1 bottle of special “Mesa para 2” wine.

August 07, 2013 — 0 comments
crowdfunding successful! millions of thanks to all the contributors and… read more