"The Retired City" is a book about the self-constructed gardens on the periphery of the city of Barcelona. The publication is organized as a dictionary and reflects, through photographies and texts by various authors, on the variety of aspects surrounding this widespread informal urban phenomenon. To explore and understand these gardens is a way to approach one of the many ‘disobedient’ autonomous practices that shape today's contemporary cities. Practices that, far from being incidental, allow us to understand what's going on behind the so-called urban order. "The Retired City" goes beyond a simple aesthetic approach and focuses on the social dimension of these self-constructed gardens, seen here as a lesson of autonomy in a society that insists on assimilating 'Retirement' to uselessness and dependence.

ABOUT THIS NEW EDITION

This work is the result of a collective research that began in the summer of 2006, and was later presented as a book for the exhibition "Post-it City. Occasional Cities" (CCCB, Barcelona). During the following years the book was printed several times, always through short prints that were always sold out quickly. Each of these new editions allowed also to increase the content of the book. For this new and definitive reprint, new contents are presented in a higher quality Spanish/English edition of 1000 copies. This publication received a public grant but, to cover all its costs, additional forms of funding were required such as the crowdfunding system offered by the Verkami platform.

You can check the 2010 sold-out version of the book at: "The Retired City"

Help us reprintig the book by purchaising a copy in advance that will be sent to you on January 2012. Thanks very much!

Itinerancy and evolution of the work

This project was on itinerancy, as part of the exhibition "Post-it City. Occasional Cities", around various South American countries between 2009 and 2010, and can be seen now at the Palacio de Cibeles in Madrid. Earlier, in 2008, the project was included in the exhibition "The gift of life. On aging and its artistic representation" at the Art Center La Panera (Lleida, Spain). Finally, in 2010, the Sala d'Art de Ripollet (Barcelona) organized the solo show "The Retired City ", where was presented a video documentary that, under the same title, shows the daily life of one of the many retired citizens that works, autonomous and illegally, on one of the many gardens around this population.

CHARACTERISTICS OF THE PUBLICATION 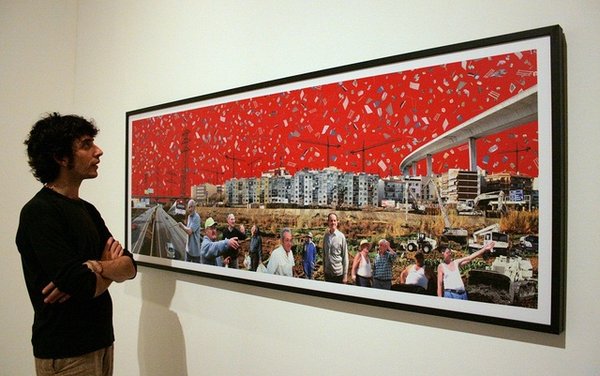 The book THE RETIRED CITY is now being printed. In a couple of weeks I'll start delivering it to all of you. Thanks for your pacience.