With taste and aroma absurdity of diversity, a show that combines dance, voice, song, and visual theater. One assembling stage which is about diversity, uniformity, femininity ... from two distinct elements, rice and sand.

Contribute to the project
View project in Català, Castellano and Français

Thanks to your blog, Facebook credits and the DVD of the work
+ DVD of the show
(If you can not come to the preview)

Arròs amb sorra (Rice sand) with absurd taste and aroma of diversity, a show that combines dance, different styles of dance, voice, song, and visual theater. Arròs amb sorra, a show that discusses scenic diversity, uniformity, femininity ... from two distinct elements, rice and sand. If we join two words in one sentence, rice and sand, an absurd result. Placed on the plate, from a culinary perspective, impossible.

Arròs amb sorra, the difference between unity and uniformity.

Grains of rice, all very well identical. Grains of sand, all of them different.

Rice and sand, despite the difference, have similarities in shape and set, large, small units individuality. Grains of rice, grains of sand ...

Rice fields and sand dunes or beach as two very different worlds, living in neighboring areas where the visual is difficult to ensure that there are two realities, form the same landscape. We can see well near the city of Girona, Pals, the rice fields, wetlands, the dunes, the beach. Their spaces are neighbors, but by nature, incompatible one inside the other. In fact, rice take the place of former wetlands. But this does not preclude its incompatibility good-both influence one, decisively, each from his own personality. Live from diversity.

Unity through diversity, an idea that does work and beat the life on our planet since the birth of life.

Uniformity, a human invention, the result of the need for absolute control. More likely is that, to choose between life control or let it flow freely, diverse as it is in nature.

*Rice flew on the couple after the ceremony ... a grain of rice in the eye, a grain of sand in the mouth.

Who rice cooker? Her, him, them, them, or all at once?

The sand in the clock time. The rice in the pot life.

What are you? What are we? A handful of rice grains? Or a grain of sand?

Rice sand where the man is not the man that most men want to believe they are*.

From the reflection display, based on the concept of diversity and difference between unity and uniformity, there will be an assembly stage where these ideas, questions and absurdities are reflected and give rise to the creation of a show dance itself starts off well, for consistency through diversity.

This means, logically, that the establishment can not be single person. A team many people from many different styles and techniques of dance or art movement.

As an extension of the idea of ​​diversity and concepts of nature and trying life to music can not just be a support that is present electronically. So the idea of ​​the music is born and on stage, created and issued by the group itself. For this purpose it includes a professional music and singing soprano (Mònica Orpí Roth). To bring the musical direction and enable people to dance also uses voice with confidence.

Thus, the group is set up to four players in the world of dance and the art movement that also use the voice and singing, and singing for a person who will use the movement as a integral over the group. Unity through diversity.

Exchange process and techniques of expression

The process began in September 2012 with workshops in which an exchange of different working methods of the techniques that each person in the group practice, with special emphasis on ways of using the voice On the one hand, and the use of improvisation as a tool to create body and movement.

This exchange has created a cooperative basis in which each performer, keeping his personality and technique work, soak and forms of expression of others. Thus, the group, while maintaining diversity at the same time is able to create a common energy that respects and enhances the diversity in the group.

Process of creating and testing

The second stage of the process has been a series of sessions based on improvisation where worked from images and sensations related conceptual basis. Thus there have been ideas, scenes, relationships, situations and atmospheres that after a selection process are considered valid or not for the assembly or have given rise to the creation of others.

From concept and ideas arising in jam sessions, we developed a script scenic base from which the process of being done choreography and music. Rehearsals began in March of this year and end in a first phase, this June.

The assessments of the pre-release of June 16 to take final process, making corrections and changes from the contributions of their own collective and diverse opinions that are collected from a participatory process of team of collaborators.

The premiere is scheduled to make it to the city of Girona during the fall or winter of this year, an area still to be determined.

The money we raise will go to Verkami to cover the cost of costumes, scenery, lighting, and video communication, the external costs of the team creation and performance. If we can cover these expenses, we can move forward on this show we have many hopes. Therefore it is vital your cooperation and welcome your input.

The entries that pertain to you as your reward, you can pick up the same theater the day of the preview. Before we will contact you via email. 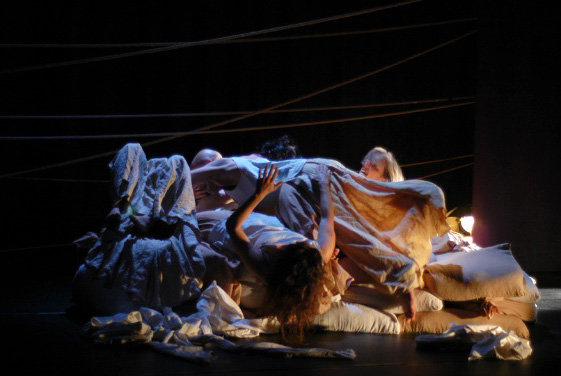 Thanks to your blog, Facebook credits and the DVD of the work
+ DVD of the show
(If you can not come to the preview)