A thousand Reasons for a workspace

Raons Públiques (Public Reasons, in Catalan) has started renovating a workspace in Poble Sec, Barcelona. With your collaboration we can finish creating an inviting and functional space, to continue defending the rights of citizens to decide what our cities are like.

Contribute to the project
View project in Català, Italiano, Castellano and Français

Use of the main room for a set period of time twice + T-shirt designed by Raons Públiques + Raons Públiques pin + members card + invitation to opening with delicious hors d'oeuvres.

You may view the video with English subtitles here

REASONS FOR CITIES ARE MORE FAIR AND JUST

Can the city become a social justice tool, a redistributor of wealth, an agent that fights against inequality?

We, Raons Públiques, are a group of people who believe that yes, they can, that our cities could be built in another way, that they should be designed by and for citizens, those who use it and suffer it every day. However, public space is often conceived from centers of power, designed to subject the population to the rules of the driving force of the 21st century: the markets. Only a society aware of its rights, organised and militant, can retrieve for itself the space of coexistence that was hijacked by private interests. Only through permanent demands, critical involvement and active participation can citizens influence in the conception and design of their own habitat.

WHAT IS IT THAT WE DO?

With this philosophy, Raons Públiques develops projects that involve citizens in the design of their common spaces, such as streets, squares or school patios. We are anthropologists, designers, architects and sociologists who take on that necessary job (which we love) of being mediators between the city technicians and the neighbors.

In the three years that we have been working we have researched different ways of involving the people in the problems and urban situations in their immediate surroundings. We have built imaginary cities out of paper in Plaça Catalunya, we have toured towns with a cart that instead of ice cream was full of neighborhood claims, we have been “neighbourhood detectives” with the kids in Fort Pienc, built a giant slide with parents, teachers and students at a school, and drawn and re-drawn the cities along with their inhabitants.

A SPACE FOR CONCORD

In January, we rented a studio space on Concordia Street, in the Poble Sec neighborhood of Barcelona. We are refurbishing it with few resources but lots of excitement. This will allow us to become part of the day-to-day life of associations and expressions of protest within the neighborhood, and at the same time make our experience in urban issues available to all its inhabitants to jointly defend the right to the city.

Our intention is for the space to become a point of reference for the neighborhood where residents can organize lectures, presentations, debates and other events that promote critical citizenship.

AND WHAT ARE WE GOING TO WITH THE MONEY?

We have been doing construction work for about three months, designing and building with our own hands, on a very tight budget, recycling and recovering as much as we can.

At the moment, the false ceilings have disappeared to reveal a Catalan vault ceiling; the recycled wood has been converted into windows and doors; and what was a small, grey bathroom is becoming an attractive corner of the patio. We have left some exposed brick walls, and are recovering part of the decorative wallpaper that was removed.

With what we raise with your collaboration, we will be able to cover a cold and dangerous floor with a wooden one which will be warmer and safer, hopefully sparing Montse from another fall (see video)! We also need to update the electrical wiring and plumbing, as the building is old and damaged. We want to reconfigure the entrance, offering up some of our space to expand the sidewalk, and to generate a cozy transitional space where the sun shines in the morning. Here we look forward to inviting neighbors to have some tea while sitting on the bench that we will soon be building.

Counting on your support will not only allow us to finish the construction work to share this new space with the neighborhood of Poble Sec, but it will allow us to get to know each other, and who knows, maybe someday collaborate or support each other in some activity. We thank you in advance for your interest, and we look forward to meeting you with open doors (if we get to finish them), at 30 Concordia Street, Poble Sec, in Barcelona.

Contact us by e-mail at the following address: info@raonspubliques.org

Or at our various virtual spaces:

We would like to thank Xusifilms for directing and producing our video. Thank you so much, Xusi! 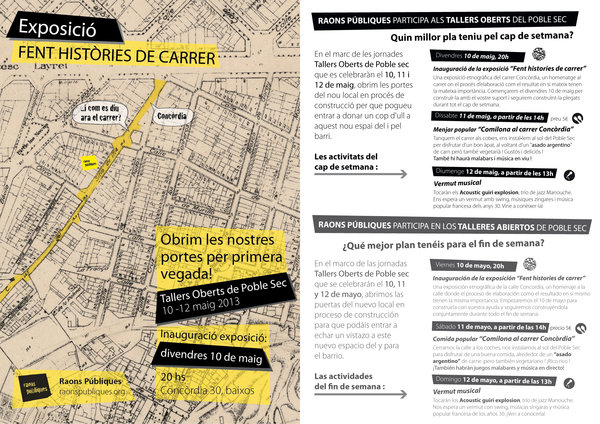 Use of the main room for a set period of time twice + T-shirt designed by Raons Públiques + Raons Públiques pin + members card + invitation to opening with delicious hors d'oeuvres.