El Viaje, a tale for babies

A high-contrast book that stimulates visual development from birth and encourages attachment through a story to share.

Torrelavega
This project ended November 30, 2021 without achieving its objective
0
seconds
22
Pledges
612€
From 4.600€
The link to the project has been copied to your clipboard

"EL VIAJE", A TALE FOR BABIES

We are looking for backers to edit "El Viaje", a tale to share with babies from their first weeks of life. It is composed of high-contrast images that tell a story open to fantasy.

"El Viaje" is a tale that babies can watch, but people of any age will enjoy imagining about the story. It is a picture book, without text, innocent and a little absurd, that will captivate science fiction lovers, aerospace engineers and philologists.

But babies and families will find some more benefits in this book. "El Viaje", on the one hand, stimulates the development of the little ones' vision and, on the other hand, helps to create emotional bonds with the people around them if they opt for shared reading as a play. It will also be made of safe and resistant materials, so that it can be used as a toy when it is time to explore and experiment.

During their first weeks of life, babies see in black and white, and gradually incorporate red, green, yellow and blue. By four months, they see all colours, but they continue to be attracted to the higher contrast combinations.

"El Viaje" illustrations take advantage of all these keys to be useful and attractive to babies from their first weeks of life.

Sharing the reading of stories with the newborn helps to create emotional bonds. Using different tones of voice, laughter, sounds, songs... the baby gets to know the people around him and understands reading as a game.

Unlike other high-contrast books, "El Viaje" presents a fantasy tale so that we can play telling the story and share it with older brothers or sister too.

For this campaign, we have designed several rewards that we believe will be very useful for both babies and adults:

"El Viaje" book. It is a cardboard book with spacers in a glossy laminated finish, with dimensions of 140x140mm. It consists of six hand-drawn double-page illustrations with well-defined strokes and high-contrast colour combinations (mainly black and white, but also red, yellow and blue).

A user guide. For those who have not yet tried reading stories with their babies (or those who already do and are looking for new ideas), we have prepared a user guide with information and tips to make shared reading a good experience. Among other things, we talk about baby's positions and tricks for interaction. In addition, we include our version of the story of "El Viaje" (which is neither the only one, nor the best!).

A backpack. A perfect bag for kindergarden, but it can also be used to carry books, snacks, toys... whatever comes up. It is made of cotton and there are two models to choose (black or natural tone), both with motifs from the story of "El Viaje".

If you have decided to become a backer, you will be pleased to know:

This is an "all or nothing" campaign. If the project does not reach its funding goal, you will receive your contribution back at the end of the fundraising period through the same payment method you used.

If the aim is reached by the end of the campaign, this is the planned schedule for the delivery of rewards for patrons:

Shipping costs are free within Spain. The shipment is made by ordinary mail through Correos. However, we include registered and international shipping options that can be selected on the right side of the campaign, in the form of rewards.

ABOUT THE AUTHOR AND THE PROJECT

I am Ana Vega, a communicator by training and trainer by profession. My career began in the publishing world, but I have been working in social action for more than a decade.

I have been exploring children's literature for years and building illustrated stories for my captive audience. With CuentosCrecientes I want to open a door to self-publishing projects that have been meaningful to me, and that I think may be of interest to others.

"El Viaje" was initially created to give shape to a sleepless night, and ended up becoming a series of black and white drawings that sought to attract the attention of a lazy baby. When it proved to work, we share it. We consulted fifteen families who got involved, fought to stop their babies from eating the story models, and sent us their experiences and suggestions for improvement, which have been transferred to the final version that we will publish. So, in a way, all of them are also behind "El Viaje".

You can follow this and other projects of CuentosCrecientes at: 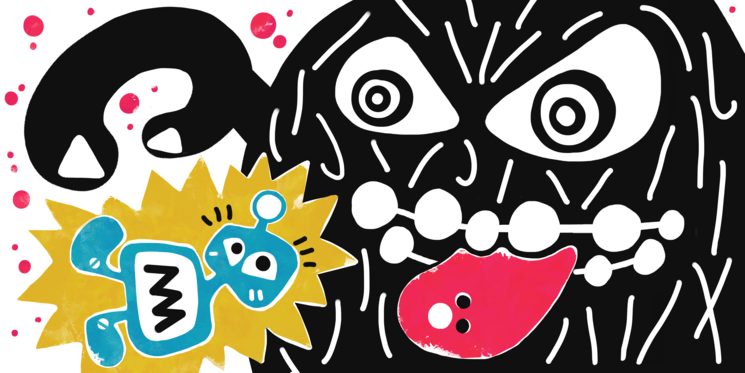