The story of the 'other mothers'. The love and the distance, between a child and her non biological mum.

5€
0 backers
Come to the premiere

You will be mentioned at the end of the movie as a patron
+ Exclusive invitation to the première (reserved seating)
+ Physical format of the movie and the Original Soundtrack
+ 6 standard postcards (you can choose them)
+ 1 big postcard -21x29- on wood (you can choose it)
+ 2 posters
+ 1 tote bag with an exclusive design of Zoila
+ Original painting made by Montse Pena (the sister of the director), inspired in the movie theme
+ Meal with the team (includes a drink) - limited to those who can travel to Barcelona and surroundings or Central Chile ** We will find alternative gifts if you don't live in Barcelona nor in Chile

Just click on the CC symbol, then choose the english subtitles option. Enjoy!

Zoila is an end of degree project, a documentary that portrays the complex affective bond between Gabriela (the director) and Zoila, the mapuche nanny who raised her during her childhood in Chile and who has accompanied her to this day in Barcelona. Motivated by a reunion trip to Chile, the land where they were more mother-daughter than ever, Gabriela reviews the relationship with Zoila, and discovers the distances that, over the years, have appeared between the two. The film is the reflection of the fears of a girl who does not want her family to fall apart, she wants to retain that last idea of a 'happy family' incarnated in this maternal figure named Zoila.

We are three students from Audiovisual Communication from the Universitat Pompeu Fabra in Barcelona. The group consists of: 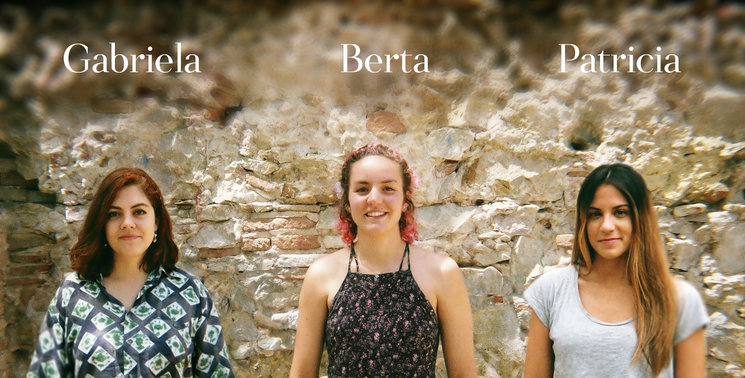 Gabriela started up the project. She considers that this film is a letter to Zoila: the only way she finds to express her fears, her doubts and her love. Catharsis: it is the word that defines what this process has meant to her, and what she wants it to mean to the spectators who identify with her history.

Patricia is responsible for putting together all the pieces of this fascinating puzzle to turn Zoila into the movie that we imagined. The editing has allowed her to know the project in detail, and the more she enters to the heart of Zoila, the more confidence she has in the present and the future of the project.

Berta is in charge of Zoila’s production. She is the one who allows everything to work, who polishes the gears of the project. What she likes most about Zoila is that it is a project made from within, with passion, with heart. And this is what makes her believe in the possibilities and future of this documentary.

Zoila is in its editing phase. The project is now 19 months, throughout this time it has evolved with the support of filmmakers such as Jonás Trueba, Isaki Lacuesta, Elías Siminiani and Mar Coll. In relation to its beginning (which raised many more issues of national and cultural identity), the film has become a project much more intimate and personal.

The shooting has been in different phases. The first 12 months in Barcelona (June 2016) and the most important in september 2016 (in southern Chile). Even so, we continue rolling to this day, small pieces to complete the puzzle that is Zoila. 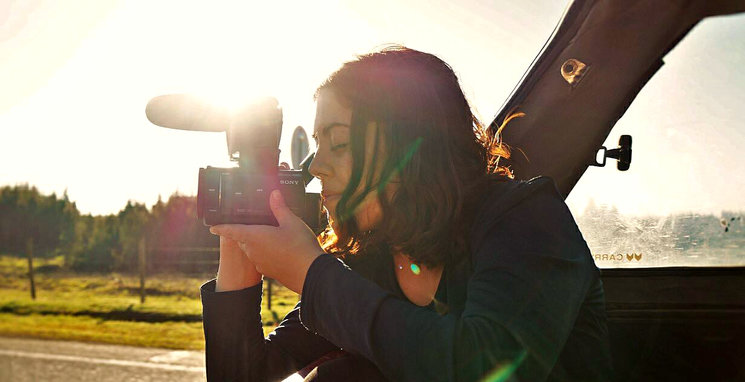 Zoila mixes domestic material of Gabriela's childhood in the form of VHS, cassette tapes and photographs. This is combined with the images shot for the film between Barcelona and Chile in 2016. The film editing combines all these sources, superimposes them, freezes them, slows them down, and it relates them. It plays with the spaces and the times, to rescue the way how we get our childhood memories: a nebula of images and sensations. Such a combination of material requires good postproduction coloring. We need your help for Zoila's color grading! (We need your help in order to do this!) 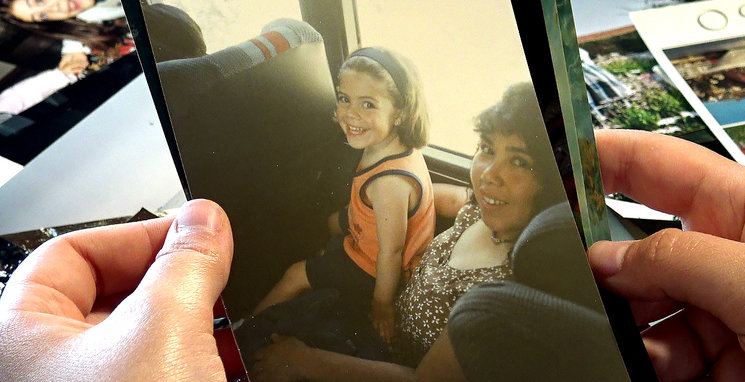 The film’s sountrack has been composed specifically by Javier Díaz, our partner in Valparaíso (Chile). It is based on a melody found in one of the cassettes of a trunk filled with the family’s memories that will have relevance in the argument and development of the same film. We need your help to be able to record the soundtrack in studio, since it is a key piece to generate the atmosphere that Zoila requires.

Why do we need your help

This project talks about the 'other mothers' that many of us have had during our childhood: nannies, grandmothers, aunts, sisters, and so on, and how these women, the children and the same families manage the undisputed theme of 'double maternity'. The movie tries to open a dialogue with these unlawful mothers, it tries to put on the table the importance of these figures in the growth of children who care for them. Therefore, we consider it important that this story reaches as far as possible: we believe that it can contribute to the necessary visibility of a hidden problem. 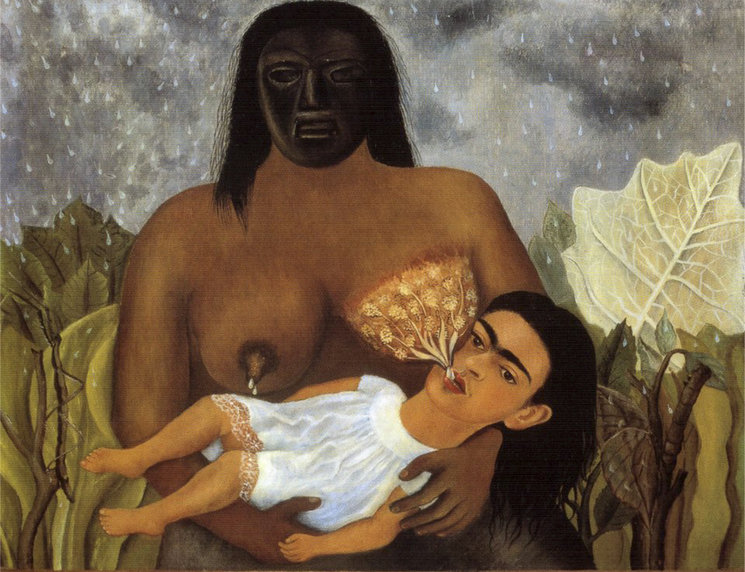 We started this project with a very strong impulse, and the biggest investment, which was the filming in Chile, came out of our student pockets. Now we need help to close this esteemed film, to which so many months and love we have and will continue to invest. We want Zoila to have the final touches it needs, so that the work we have done so far will not be in vain. How will we allocate your contributions? Mainly and in this order:

-To the sound’s post-production

-To the color grading

-To have the soundtrack recorded in a studio

-To the distribution of the film

We know that for you it will be an effort to help us, and for that we want to thank you. We are audiovisual students so we have worked on what we are good at: ideas; So it seemed right to design some creative exclusive and personalized rewards inspired in Zoila. That is why we have had the collaboration of our partner Pilar Villanueva, who has designed five of the postcards that constitute the main bulk of our rewards, in different sizes and materials, two different posters made by Montse Pena and Pilar Villanueva, and an exclusive Zoila's tote bag* design.

• POSTCARDS (standard size, large size or wooden stand): we have many different designs. Some of them are the illustrations of Pilar Villanueva, others are photographs taken during the shoot in the south of Chile and others belong to the footage of the film. You can choose the ones you like and combine them.

Click here TO SEE ALL DESIGNS in high quality 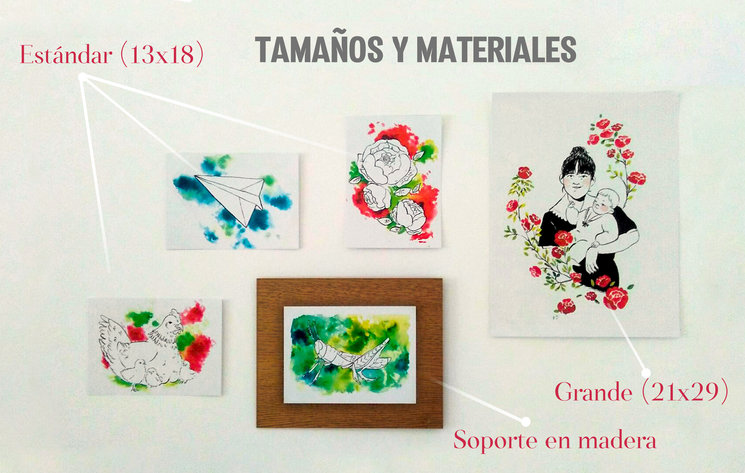 • POSTERS: We have two poster designs to choose from. The first is Zoila's official poster designed by Montse Pena. The second is Pilar’s illustrated poster. Size (29x42) 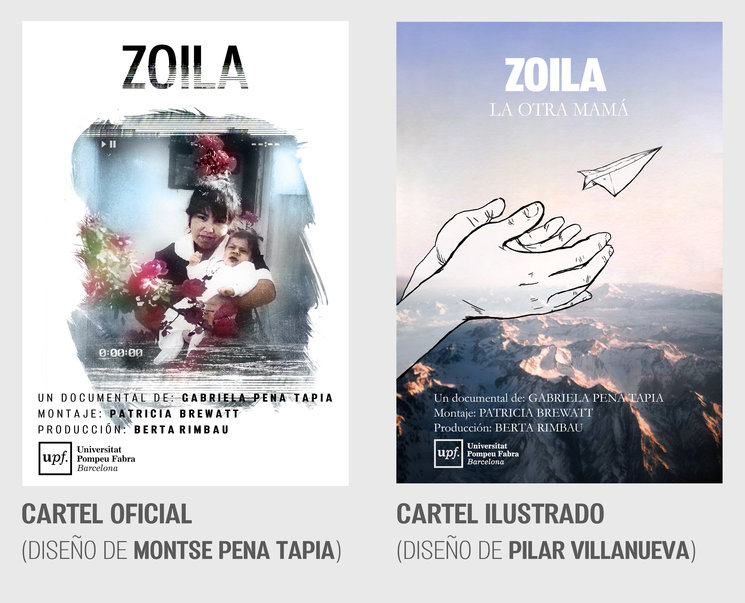 • TOTE BAGS: this is the exclusive design for Zoila's tote bags inspired in Pilar Villanueva's poster. 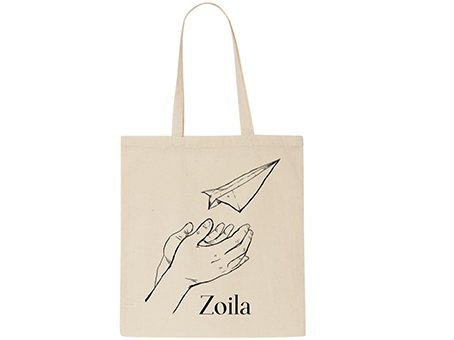 • COMMON REWARD: Everyone who collaborates in this project has an exclusive invitation to Zoila's premiere. The first pass will be in December 2017, for those who live in Barcelona or nearby, and in the future, depending on the contributions, we will plan more exclusive passes in Chile, mainly in Santiago, Valparaíso and / or in the town where the shooting took place (Chol Chol).

• OTHER REWARDS: depending on the contribution, you can access to other rewards such as the film's download link, a physical copy of it and other rewards related to conversations and gastronomy: round tables with the team with an invitation to have a drink, or enjoying a meal with the team. Finally, the highest contributions can be rewarded with an exclusive and original graphic work of the film's theme using an oil technique painted by the director's sister, Montse Pena.

• MEETINGS: The rewards that require a physical encounter with the team, are limited to Barcelona and surrounding areas and the central zones of Chile. If it were impossible to find a moment and a place to meet each other, we will get in contact with you personally to offer to you a personalized alternative.

Our goal is to finalize the film editing stage in October 2017 to begin the postproduction tasks that you are helping us to do. We want to finalize the project in December 2017, two years after its birth. At that time, we will organize an exclusive screening for patrons residing in Barcelona, and will later organize screenings in Chile.

Here is the link to our Facebook page and Instagram where we are updating the information on the film's progress: 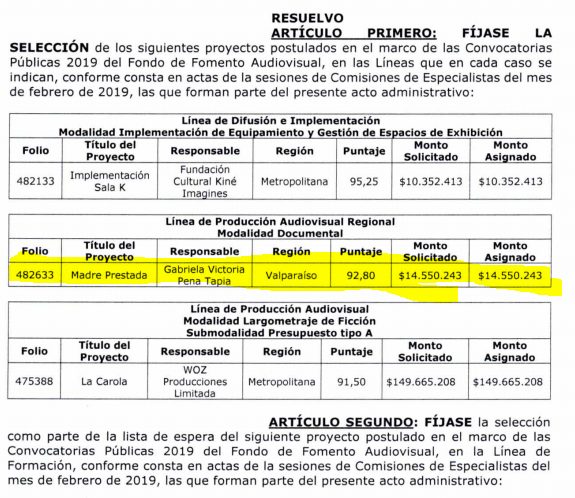 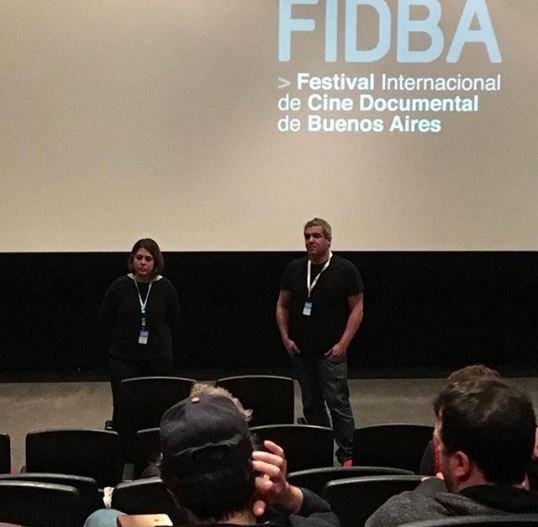 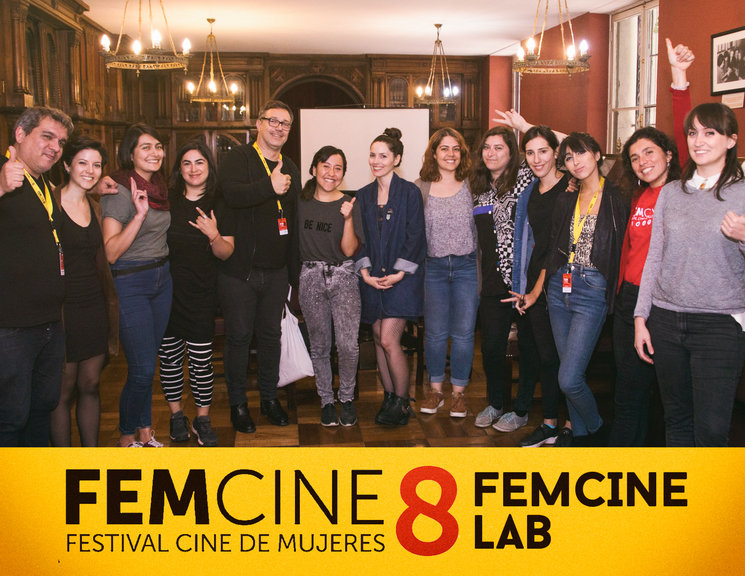 The editing of "Zoila" continues on the land where it all started: Chile. 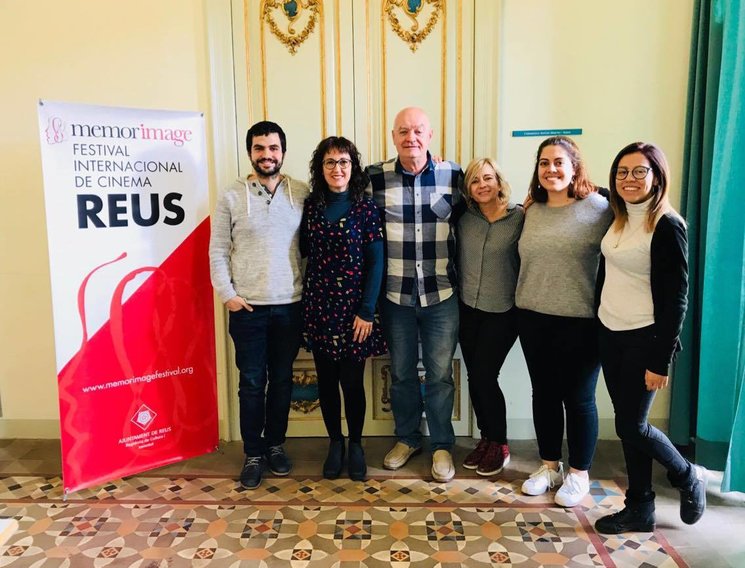 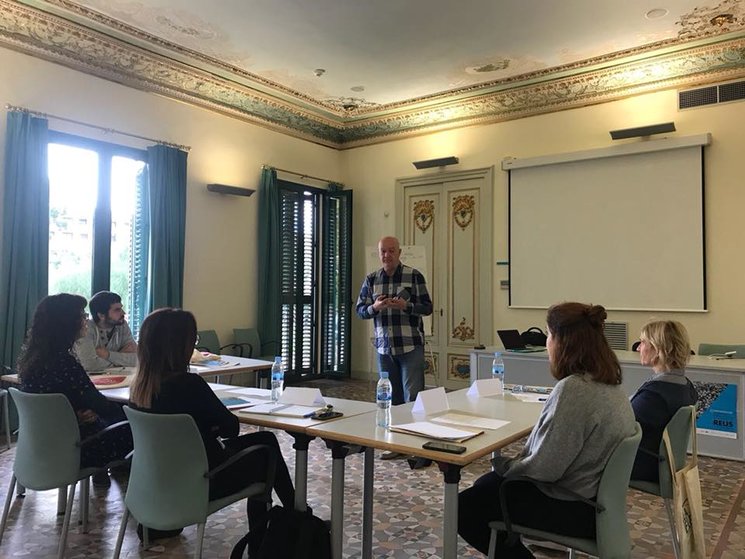 5€
0 backers
Come to the premiere

You will be mentioned at the end of the movie as a patron
+ Exclusive invitation to the première (reserved seating)
+ Physical format of the movie and the Original Soundtrack
+ 6 standard postcards (you can choose them)
+ 1 big postcard -21x29- on wood (you can choose it)
+ 2 posters
+ 1 tote bag with an exclusive design of Zoila
+ Original painting made by Montse Pena (the sister of the director), inspired in the movie theme
+ Meal with the team (includes a drink) - limited to those who can travel to Barcelona and surroundings or Central Chile ** We will find alternative gifts if you don't live in Barcelona nor in Chile 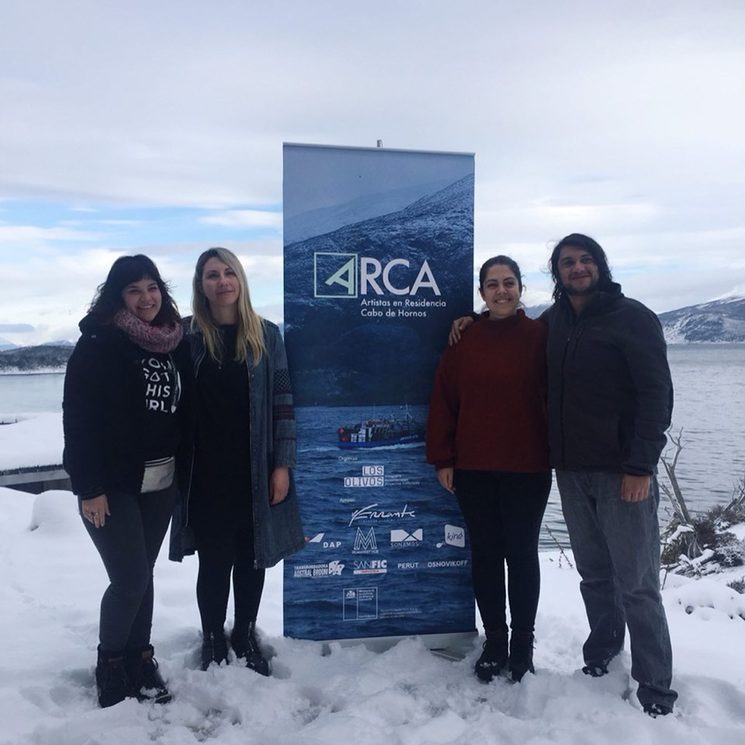