ADAM PEIPER is a short film written and directed by Mónica Mateo. The film, featuring Luis Bermejo, Maru Valdivielso and Octavi Pujades and set in a dystopian world of retro-futuristic atmosphere, has been shot in Madrid in February 2015.

The producers complement the financing needs in order to complete the film’s total Budget (including production, post-production and distribution)

The earth, year 2984: The world has changed. Human beings have changed.

The envelope stuffer of one of the thousands tasks deposits that fill the inside of the planet, works tirelessly in what seems to be another day in his grey, drab, monitored and insignificant existence.

But this is not another day. This is his worst nightmare 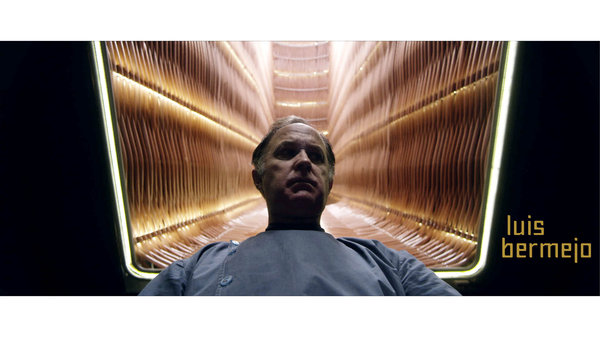 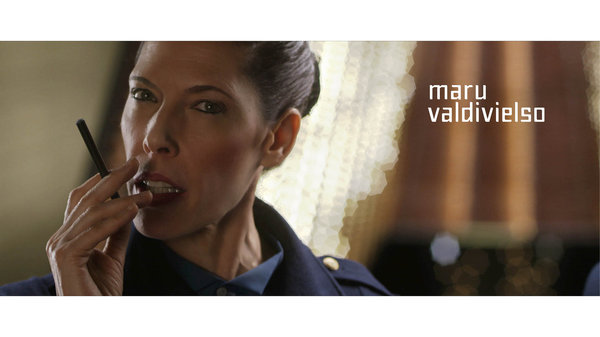 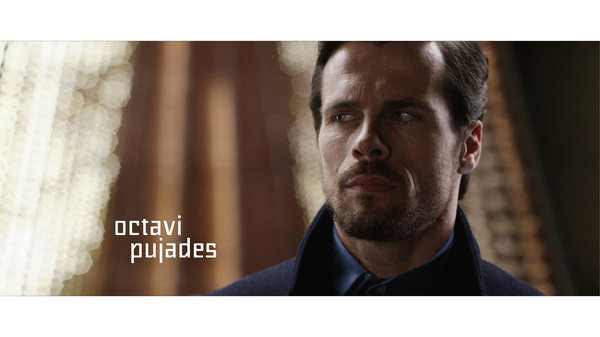 Adam Peiper is the story of a man dissatisfied with his life. A bitter man, tired of his job and an oppressive system that only cares for productivity.

Up to here this could be the plot of any film, and even the story of any life. But Adam Peiper goes beyond that.

Adam Peiper tells us about everyday life in a different way, wrapped up in a science fiction atmosphere and ** retro-futuristic** aesthetics. It speaks about the fear of the unknown and how any ordinary day can turn into absolute horror and depicts how conformism, laziness and anger can make a person become what he hates more.

Centuries of changes and evolution have transformed the earth into a cold, dark and inhospitable place, forcing people to create huge networks of underground life.

Massive migrations, weather, geographical and cultural changes, the obsession to achieve the status of the ideal life; all this, together with the need to create a channel of global communication to expedite relations between the underground networks and between countries, have generated a mixture in the language, resulting in a new and unique tongue spoken by all the inhabitants of the earth, a blend of all the languages spoken once.

Where do your contributions go?

The filming has been made possible thanks to private investment and also public aid. But mostly with much hard work and confidence in the project.

Now comes the post-production phase and we need a push forward.

Your contributions will go to:

- Cost of crowdfunding platform: The realization of a crowdfunding as it, is associated with a number of taxes, management fees, bank fees, shipping and paperwork we need to cover.

We offer different kinds of rewards. You will find the description on the right side of this page. 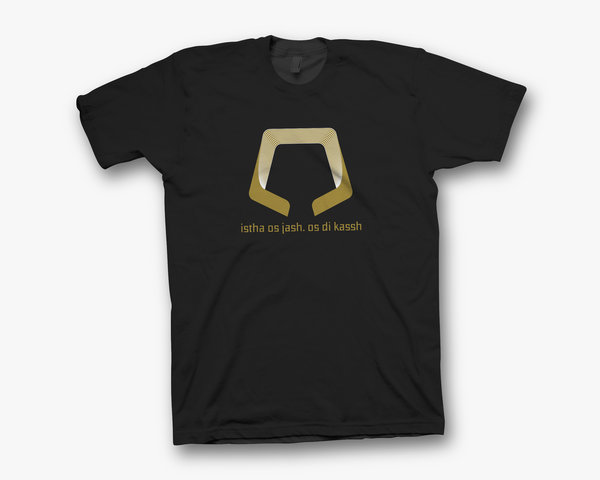 This t-shirt (designed by Javier Porras, jvrdesigner.com) is one of the rewards.

Any contribution is a lot for us, because it will help us give Adam Peiper life in the way it deserves.

If you have any questions regarding contributions and rewards, you can ask through the Verkami "questions” section.

Shipping costs rewards will be covered by us.

In the case of applying various rewards that require shipping, will be unified into a single shipment, as well as the delivery .

The shooting took place in Madrid in February 2015.

Currently, the editing process has been already completed and we are fully dedicated to the VFX and sound post-production phase as well as the composition of the soundtrack, the design of the credits, promo material, etc.

We expect this phase to be completed before the Summer, and release the film by Autumn 2015.

The rewards will be delivered in different times:

T-shirts: Over the next month to finalize our crowdfunding, in May.

DVD short film and viewed on- line: This reward will take much time, until the short film is released (expected fall 2015).

Caricature and consulting production: From the time we end the campaign until August 31, 2015. In the case of caricature we will need you to send us a photo of the person to caricature.

In the case of applying various rewards that require shipping, will be unified in a single shipment and delivery time.

Important note: Your donations will be made effective at the end of the campaign and only if the pre-defined goal is reached. What happens when you choose your reward is a pre-approval of your card or PayPal account, the two accepted payment options.

If you have any questions about the project, the crowdfunding campaign or just want to know us better, please contact through the following:

Thank you very much for your collaboration! 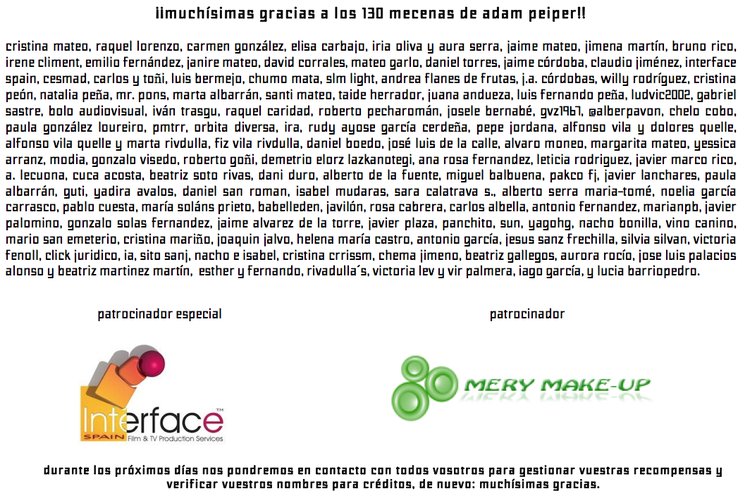 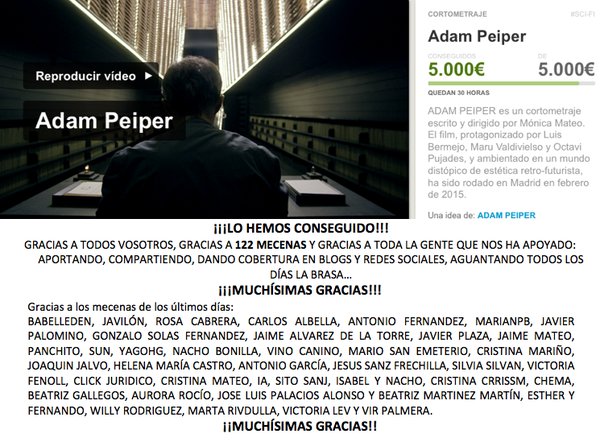 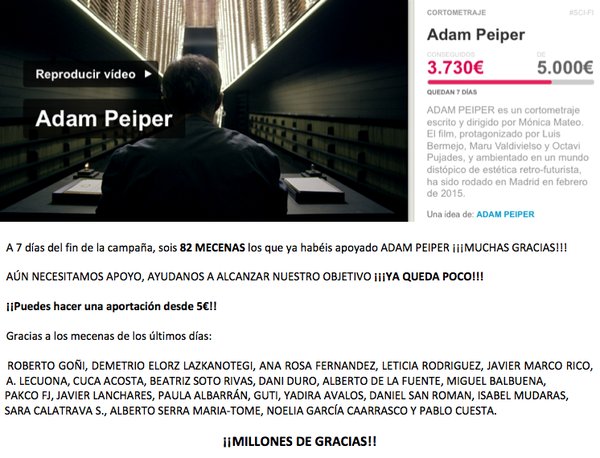 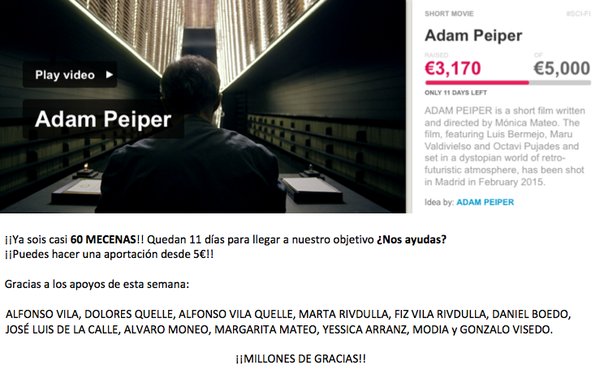 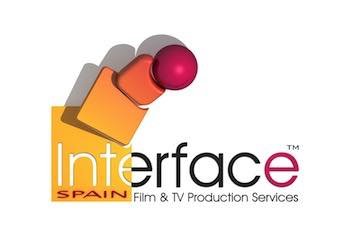