The distance of the names

'The distance of the names' is a documentary that follows four young university students's search to find a group of people who, unbeknownst to them, were involved in and witnesses to an international solidarity project throughout their childhood during the Spanish Civil War.

In 1937, the English journalist John-Langdon Davies established PLAN, an international project dedicated to helping children victims of the Spanish Civil War. The project consisted in the creation of shelter homes which, due to a system of international sponsorship, were able to provide a home for more than 400 vulnerable children between 1937 and 1940. Seventy five years after the beginning of this project, four young university students’, in the process of completing their Bachelor in Audiovisual Communications, discover a list with the names of the children that lived that experience and decide to initiate a search of those still living.

The distance of the names is a historical documentary, deliberately exempt of archival and library images, marked by the difficulty of gathering the pieces of an international story – which had been completely disregarded throughout time – , and by the fervent determination to rescue it from the ashes thanks to the witness testimony of its last direct protagonists; the last voices of a generation, the ‘telling’ of an otherwise untold story.
The search process in itself – the phone calls to find witnesses from those days, the visits to old colonies, the investigation about the international child sponsors or the interviews with the main characters – is the driving
force and the thread that runs through the entire documentary, and it is the same search process that slowly reveals to the spectator the great story of the project initiated by John Langdon-Davies. Over five years, children from all over Spain who had been forced to abandon their homes lived in
especially-designed shelter homes located in Catalonia and the French Basque Country, and were sponsored by adults from the United Kingdom and North America with names as re-known as Ingrid Bergman, Frank Sinatra, Peter Ustinov and Eleanor Roosevelt. Nonetheless, far from portraying the story in a simply informative style, the four members of the team will get involved in the narration of the tale in an attempt to bring it to the present, to spread the word and, most importantly, to capture the memory before it is definitively erased by the passing of the years.

The team of the documentary is formed by four young people who have recently graduated in Audiovisual Communication studies. They all perceive the world in the same way and they all share a special interest for the documentary field. Having worked before in other projects, they take The distance of the names as a personal project which makes them submerge in the non-fiction genre and give them the possibility of rescuing a story that would be buried by time.
They have been guided during their process by audiovisual's professionals such as Isaki Lacuesta or Jordi Balló, thanks to the support of Universitat Pompeu Fabra. 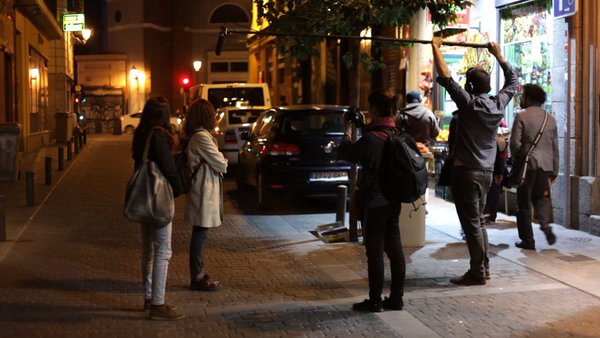 BATABAT is a film production company that creates and markets content related to the culture and history of both Catalonia and the world in an entertaining, innovative and rigorous manner, addressed to mass audiences. Since 2006 we have developed television programmes, documentaries and film productions for several platforms. BATABAT has particularly worked for Televisió de Catalunya and Televisión Española, as well as for other channels around the world such as Al-Jazeera (Middle East), France3 (France), DR (Denmark), Canal Historia (Spain), OnceTV (Mexico), RAI3 (Italy), ETB (Basque Country), Histoire (France) or TG4 (Ireland).
Batabat is a cooperative which belongs to Grup Cultura 03, which in turn is formed by several cooperative companies from the cultural sector

Since this documentary started as the final project of the Audiovisual Communication degree at Universitat Pompeu Fabra, The distance of the names is a low-budget documentary. The trips to visit the shelter homes, the interviews of the testimonies as well as all the expenses have been assumed by the technical team, but, to finish this documentary in a proper way, we will need external contributions. That is the reason why we are starting this Verkami crowdfunding campaign. All the contributions will be welcomed and they will get a reward back! Then, we will be able to complete the whole process to release the movie: composition and recording of the original soundtrack, the color correction,the mix sound, the DVD edition and the distribution of the documentary to festivals around the world.

Between our pledges you'll see that we are offering the book El xalet de Puigcerdà, written by the Catalan journalist Jordi Finestres. This book was the origin of our project. He found some documents that where on the archives of the Rhode Island University that talked about the existance of some colonies that existed in Catalonia during the Spanish Civil War. One year later, he published with "ARA llibres" the book El Xalet de Puigcerdà. Thanks to his job, we began to look for some of the witnesses of the story and we could start our documentary.

As soon as we reach our goal for financing the movie, we will start with the postproduction process:
- November: Composition and recording of the Soundtrack
- Desember: Sound mix and color correction
- January/February: Rewards' shipping

HD Download of the documentary
+ Your name in the credits

HD Download of the documentary
+ Your name in the credits