The Historical Archive of the COAC collects, safeguards, organizes, and disseminates the documents that have been donated to it. Digitizing the ADLAN collection will give the general public access to an outstanding example of the connection between avant-garde art and architecture in Catalonia

Barcelona
This project ended April 19, 2014 without achieving its objective
0
seconds
59
Pledges
2.125€
From 5.149€
The link to the project has been copied to your clipboard

The Historical Archive of the Association has discovered, among the archives of architect Sixte Illescas, around 600 documents from ADLAN (Amics de l’Art Nou, or 'Friends of the New Art'), an avant-garde group that formed in 1932 in Barcelona and very quickly stirred up the artistic and cultural consciousness of the time with their ideas.

The most active members of ADLAN were architect Josep Lluís Sert, the businessman and photographer Joaquim Gomis and the merchant and gallerist Joan Prats, but other members included the architects of GATCPAC (Group of Catalan Architects and Technicians for the Progress of Contemporary Architecture), such as Sixte Illescas. It was, in fact, Illescas who, in the final days of the Spanish Civil War, crucially rescued the ADLAN documents and kept them safe in the office of his professional practice.

ADLAN was supported by members of Catalan civil society, liberal professionals, merchants and businesspeople who all had a keen interest in new artistic trends and styles. In 1933, ADLAN announced its manifesto with the proclamation ADLAN us interessa/ADLAN us crida (ADLAN interests you/ADLAN calls you), defining itself as ‘a group of friends open to all the new spiritual unrest'.

Two activities stand out above the rest: the first monographic exhibition of Picasso’s work in Spain, which was held in Barcelona, Bilbao and Madrid; and the coordination of the extraordinary Christmas issue in 1934 of the magazine D’ací D’allà which was dedicated to twentieth-century art and featured a comprehensive overview of the most avant-garde art of that time.

HELP US TO DIGITIZE THE COLLECTION

We believe that while the ADLAN collection may be small, it is both rich and varied. The recovered documents not only include works by Josep Lluís Sert, but also Joan Prats, Joaquim Gomis, Salvador Dalí, Pablo Picasso, Joan Miró, Alexander Calder, J. V. Foix, Carles Maristany, Robert Gerhard, Man Ray, Varese, and more. It thus provides the clearest demonstration of the connection between avant-garde art and architecture in Catalonia.

It is also a collection that has barely been seen, as it has only been lent once for the sole exhibition ever held on ADLAN in 1970.

For all these reasons, the Historical Archive of the Architects' Association of Catalonia wants to make this treasure trove available to all.

To do so, we need to catalogue the collection in the form of single documentary records (piece by piece), digitize all the documents and then disseminate them through public databases and publication online or on paper. We need everyone’s support and cooperation to make this possible.

We estimate that the cataloguing and digitization could take around six months.

REWARDS FOR YOUR COLLABORATION

To thank you for your support, the Association is offering a special bookmark whose design is based on the historic manifesto of ADLAN.

For larger contributions, we are also offering up to a maximum of four prints illustrating documents from the GATCPAC collection in COAC’s Historical Archive in A3 format on special 170-g paper. The prints will be issued in this order:

Print 1
‘The city at rest and on holiday. The need for leisure areas in big cities’, 1934. 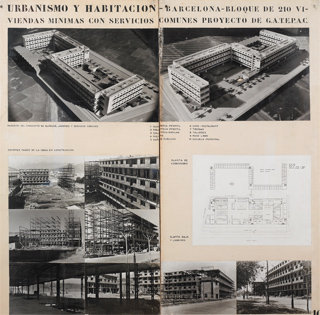 Le Corbusier – GATCPAC. ‘Diorama of the Macià Plan for Barcelona’, 1934.

If the funds estimated for the digitization of the ADLAN collection are exceeded, the money will be earmarked for actions related to the same project: exhibitions, publications and other actions.