Cabanyal Íntim is an urban and independent festival that specializes in intimate, close up and experimental pieces. It takes place over two consecutive weekends inside the historic homes of El Cabanyal district in Valencia, located on the shores of the Mediterranean

INTIMATE, CLOSE UP AND EXPERIMENTAL

values, because you are invited into a home to see for yourself that there is a life inside, you are helped to understand it’s value and you ask yourself why it has to be

destroyed*. With these words the essence of the festival was defined by Javier

Mariscal, who selflessly developed the seal of identity of the Cabanyal Intim and

designed the poster for its third edition, held in 2013. A gift of creativity and

generosity, with which the prestigious Valencian designer showed his support for this theatrical Project.

Cabanyal Íntim is an urban and independent festival that specializes in intimate, close up and experimental pieces. It takes place over two consecutive weekends inside the historic homes of El Cabanyal district in Valencia, located on the shores of the Mediterranean, the artistic haven of creative artists such as Vicente Blasco Ibáñez or Joaquin Sorolla.

The Festival annually charts an artistic route through the neighbourhood which

approaches a theatrical event from a multitude of artistic interpretations. Theatre, dance, circus, live music, clown, underground cabaret, mime, video art or poetry are all at home in the bedrooms, living rooms, kitchens and patios of Cabanyal households.

A route of home theatre, giving life to a dozen pieces of living art, of reduced size and time, created expressly with the theme of each issue in mind. Fresh, daring work, which moves away from established conventional formulas and languages; which can be experienced in the privacy of real neighbourhood homes a few times a day throughout the length of the festival. Intimate and domestic spaces, altruistically lent by their owners or tenants, to be transformed for a few days into stages that play host to the first performance of some of the most innovative pieces around.

A SOCIAL AND CULTURAL PROJECT

Festival was created as a social and cultural event, and under this dual commitment has the following objectives:

-To offer unprecedented, quality programming, away from the commercial standard,

accessible and close up to the public, with affordable prices.

-To breathe new life into the Cabanyal neighbourhood, officially declared to be “of

Cultural Interest” in 1993, with the implementation of a theatrical and performance

-To promote, encourage and give visibility to the creation, research and contemporary stage production that is forged in our community and offer their creators a space to exhibit their work.

BETWEEN REALITY AND DESIRE

The fourth edition of the Festival will take place in spring, from the 8th to the 18th of

May, 2014 under the theme "Between reality and desire"; a theme that will be common to all the shows in this year’s program. The reality of a neighbourhood and the wish to transform it, bring it to life, experience it through the act of theatre.

Cabanyal Íntim is designed for intellectually eager and curious audiences of all ages -infants, children, youth and adults- wanting new theatre experiences with a desire to

support the emerging culture that develops in the city.

The public response to the first edition brought in an audience of over 2.000 spectators, a figure that was doubled in the second edition, managing to attract more than 4.000 people to the festival. The public success was repeated in the third edition.

areas. They, along with a group of altruistic supporters, creative artists, residents of the neighbourhood and volunteers, make this pioneer adventure in the Valencian 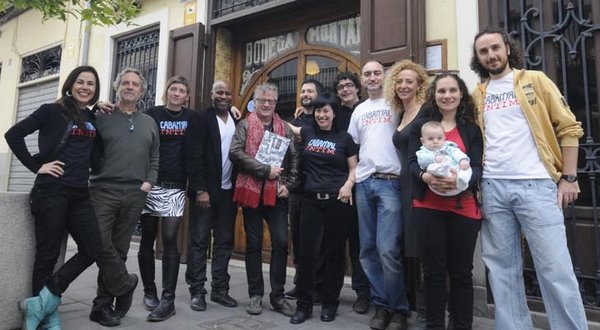 Since its inception, self-funding has been the financial model of Cabanyal Íntim; a

festival that focuses on the fringe culture, marginalized by traditional power structures and their deficient cultural policies. Since its second edition, the Festival has chosen the formula of co-financing crowdfunding, with which it has covered, thanks to the economic contributions of patrons, the minimum costs of production of the Festival. A model which is still maintained in its fourth edition- and so we ask for your support again. A collective support that encourages and helps give birth to new productions of quality and ensures the survival and exhibition of independent theatrical creation in Valencia, mistreated and maligned by the current government with their sterile management policies.

Our wish is to give encouragement and increased awareness of the creation of emerging theatre. Help us to make this a reality by your participation and commitment.

Special mention in our blog and festival program + 2 complimentary tickets

Sponsor the festival with a logo (or name) in a prominent place in the program , posters, supporting documentaries and festival press conference + Mention in press releases + 6 complimentary tickets for the festival+ 2 t-shirts with an exclusive festival design + 2 invitations to a rehearsal during the work in progress of one of the companies + 2 drinks at the opening party + 2 fridge magnets with an exclusive festival design

111
are returning backers of Verkami
19
are new backers

Special mention in our blog and festival program + 2 complimentary tickets

Sponsor the festival with a logo (or name) in a prominent place in the program , posters, supporting documentaries and festival press conference + Mention in press releases + 6 complimentary tickets for the festival+ 2 t-shirts with an exclusive festival design + 2 invitations to a rehearsal during the work in progress of one of the companies + 2 drinks at the opening party + 2 fridge magnets with an exclusive festival design