VIA SCIPIONIS (or Scipio's way)

VIA SCIPIONIS (or Scipio's way), is a pioneer re- enacting and boosting tourism project with charity goals. Its aim is walking on feet, and period characterized, the distance between Amposta (Tarragona) and Cartagena (Murcia Region) emulating Scipio's legions feat of 209 bC.

L'Hospitalet de Llobregat
This project ended April 13, 2014 without achieving its objective
0
seconds
38
Patron
2.020€
From 6.000€
The link to the project has been copied to your clipboard

Contribute to the project
View project in Castellano, Català and Euskara
About the project Read more about this project 4 updates Rewards Back this project
Share

¿WHAT IS VIA SCIPIONIS?
Scipio's way is just the iceberg tip. Actually, is the prologue of another one project much more ambitious named VIA ANNIBALICA which is being currently developing from private professional scope and for which we're looking for fundings; we propose using multitudinously reenactment of some of the most epic feats of the Second Punic War (such as crossing the Alps on elephants) as an attractive for cultural quality tourism, with very few parallels in reenactment world. 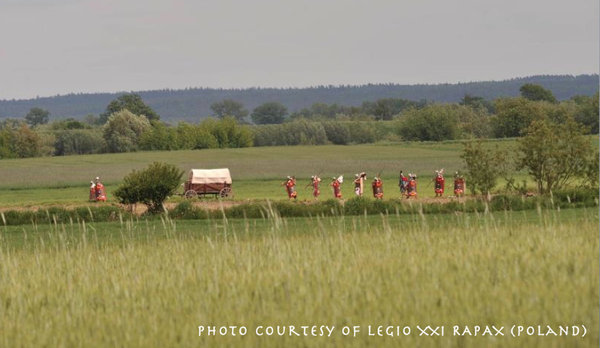 ¿WHY TO DO VIA SCIPIONIS?
In the year 209 bC., during the second war between Carthage and Rome, known as Second Punic War, Roman consul Publius Cornelius Scipio grouped his legions in Nova Classis encampment (recently located in Amposta) with the intention of marching against Qart- Hadasht (Cartagena) city, main carthaginian military base and military port in the Iberian Peninsula. According to historian Polibyus, one of the most trusted sources for this period that was able to interview veterans of that war, that army formed by two legions (more than 20.000 men), walked on feet the distance between both points... IN SEVEN DAYS!! In total, more than 460 km, with an average of 60 km. per day... could you imagine it?

To rememorate that feat, a group of volunteers will walk on feet the same distance during 15 days, following ancient Carthaginian and Roman paths perfectly characterized in an unic project and absolutely pioneer in the Iberian Peninsula. Each afternoon we'll set up a simbolic representation of a little Castrum or Roman military encampment, time at wich we'll open doors for you to visit us an knowing how was day- to- day life of a legion during 3rd cent. bC. The march will cross through 4 regions, 5 provinces and 15 villages, with a diary average distance of 30 km. This march won't be nor an outing neither a pilgrimage. It probably will be hard, using historical footwear. The most likely is that we'll suffer heat, physical pain, fatigue and some wounds and injuries but we're convinced that the ends are worthy.

Over time, participants may say "I was there". Your money will be used to test a group of reenactors, but also for friendships to narrow, not only among the participants but also to the people who will support us in this long journey. 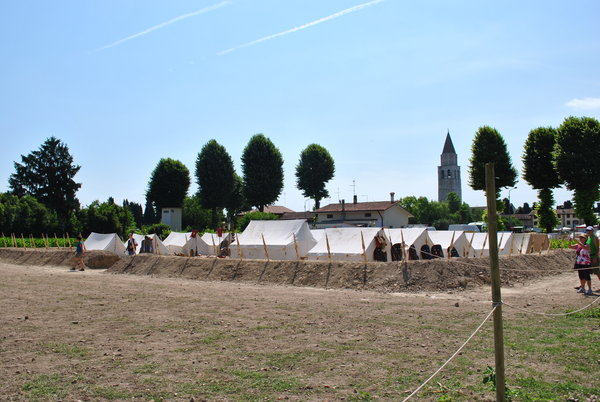 TO WHAT WILL IT SERVE?
We'll intend to use the VIA Scipionis to raise funds for charity and to be allocated entirely to the NGO "Educo" and its "Educo Dining Scholarship" project in order to get country children and girls have the opportunity to receive something as basic as a meal a day. As you know, this project will only be realized if we reach the goal in 40 days. If we reach the quantity in this period for the development of the VIA SCIPIONIS, rather than extend the deadline for more donations, we'll ask you for give Educo directly through an account number that will provide you. We settle achieving the objective.

Also, this initiative will serve as engine for boosting tourism in the villages through which it crosses, becoming a powerful attraction for visitors like you who feel curiousity about the history, archeology and reenactment, and have wanted to know the Past as rarely you're going to have a new chance. Also, we want to attract attention over the old paths, a part of our historical and cultural heritage that remains largely forgotten and abandoned... and what better way to do it than to give them the use for which they were built?

Additionally, this experience will be the basis for a rigorous scientific study of experimental archeology related to logistics, food, material and physical wastage. That information will be used to write an article to be published in a scientific journal. Finally, a video document will be drawn to immortalize the experience. 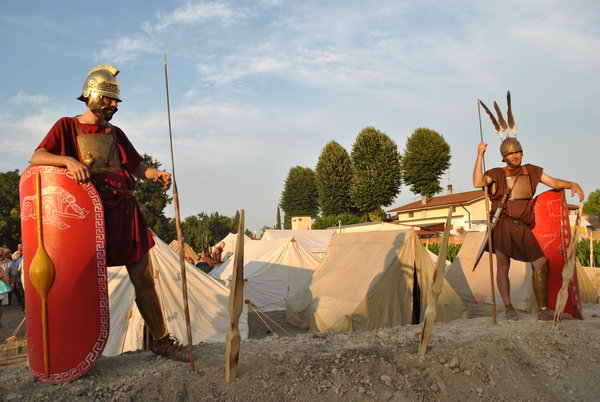 Your contributions will be fully granted to defray the costs of a project of this magnitude. So that you can get an idea, we could break it down as follows (approximately): maintenance of participants (1500 €), hiring a minimum insurance (1000 €), rewards and shipping (900 €), purchasing and renting of military equipment (600 €), contingency (500 €), taxes, fees (1500 €).

ROUTE
Participants of the VIA SCIPIONIS will leave Amposta (Tarragona) at dawn on Saturday July 5 and will arrive to Cartagena in the afternoon of Saturday, July 19, 2014. The stages are defined as we show below (although they may suffer some slight variation): 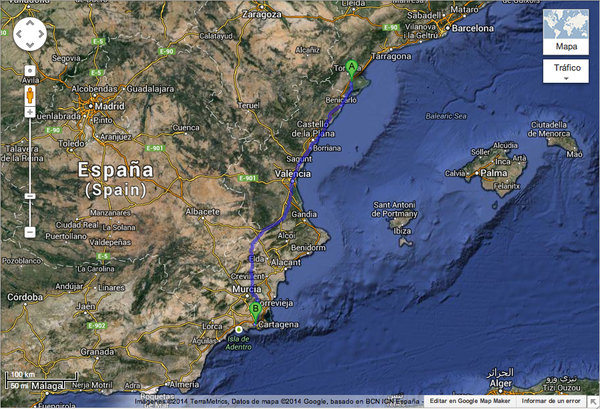 REWARDS
All of you that have trusted us will receive your rewards either by conventional mail, or during the Festival of Carthaginians and Romans 25th anniversary commemoration, in September 2014, to which has been invited SAR. D. Felipe de Borbón, Prince of Asturias. These events will take place in the city of Cartagena.

You will also find info about this initiative in our website (in Spanish), our blog and the Second Punic War Reenactment Association blog, Bellvm Annibalicvm, some of whose members will take part in the journey. 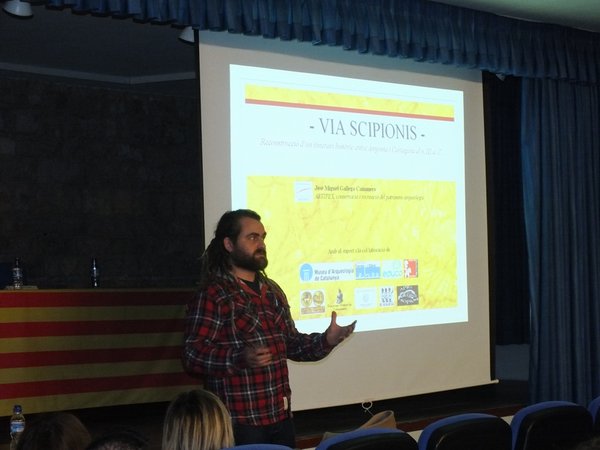 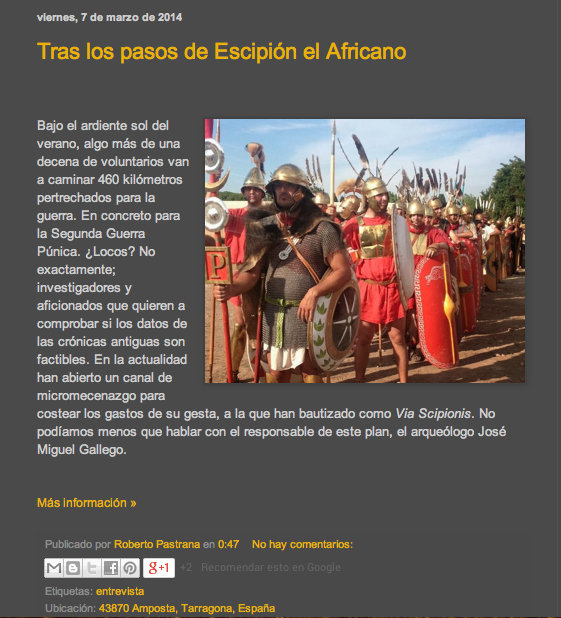 Colour postal card of the group

Colour postal card of the group