Recording of my first solo album at The Cowshed Studios in London and editing 300 copies of it.

I am a Catalan singer-songwriter and I have recently relocated to England to pursue my solo project. I won the 2013 edition of the ‘All About the Song’ competition at The Cellars in Portsmouth, and I have also been featured as a guest artist on BBC Introducing.

Now, with the help of Verkami and you family and friends, I'd like to record my first solo album at The Cowshed Studios in London. The Recording would be in February and it would take ten days. 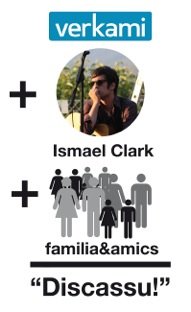 WHEN WILL YOU GET THE REWARDS?

I would really appreciate it if you could contribute to this project. If you can think of any other reward, let me know and I will consider it.

IF YOU WANT TO KNOW A BIT MORE ABOUT ISMAEL CLARK, CHECK MY WEBSITE AND MY FACEBOOK:

Appear on the credits of the album.

Appear on the credits + a gig at your place.

Appear on the credits of the album.

Appear on the credits + a gig at your place.