Reflections Of A Wandering Cosmonaut

Reflections Of A Wandering Cosmonaut sets the scene of Solar's first show titled "Ignición". A concert where music is not the only focus...

Dénia
This project ended January 04, 2014 without achieving its objective
0
seconds
45
Pledges
1.495€
From 5.000€
The link to the project has been copied to your clipboard

Sponsorship: collaborate with the project. Contributor's name appears on the back of event tickets.

1 CD de "Ignición" signed by the band. If you do not come to the concert, we will send you the CD.

Solar - From the living room: Solar acustic concert, just where do you want.

In "Ignicion" the combination of synthesizers, grand pianos, strings, woodwind, voices, vocoders and flashes of progressive rock give the lyrical message which oscillates between the light and twilight to symbolize the oppression of the individual.

Whilst recording "Ignición" during the months of July and August this year we became aware that an album like this would require a performance to amplify our message further. We then took on the even greater challenge of performing our first album in our first concert in the fantastic Teulada-Moraira Auditorium (Alicante) together with all the musicians whom have collaborated.

“Reflections of a wandering cosmonaut” extends beyond the idea of solely a concert. It's a a script, a scene, and a story.

For this we have the help of good and old friends that will without a doubt help make this possible by contributing their professionalism and talent to our spectrum of sound, lighting and visual artwork.

It would be logical to finish a tour playing in an auditorium, For Solar however, logic is merely a background thought: and our start in here in the auditorium is simply where it happens now 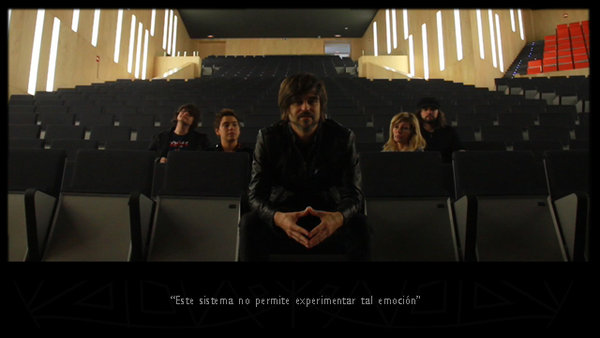 How shall we allocate your contributions?

All projects require endorsement and sponsorship. In our case the money we raise here (thanks to you) will go towards the costs of renting the auditorium, set deign, additional session musicians to Solar as well as a live video recording of the event.

**When will you receive the rewards? **

Production of Reflections of a wandering cosmonaut is already underway and the concert will be the ** February 15th, 2014 in Teulada-Moraira. ** There you will receive your reward. For those unable to attend, we will send you your reward soon.

If you want to break out from the mundane, If there's an idea in your head that tells you change is possible and another world can exists then this is the project that calls for your help and support.

Thank you, in advance

You can find more about Solar here:

Sponsorship: collaborate with the project. Contributor's name appears on the back of event tickets.

1 CD de "Ignición" signed by the band. If you do not come to the concert, we will send you the CD.

Solar - From the living room: Solar acustic concert, just where do you want.