Now or never. There's a perfect moment for everthing and now it's Campai's.

We'll record an LP album of about 10 songs, some of them already sounded in the EP we published last year (re-recorded in better quality) and some others are new. If you haven't listened to our first EP ... What are you waiting for?

Because we believe in ourselves. We are five very demanding people and wouldn't ask you to bet on Campai if we weren't so confident. We have a well established project, a very compact band and unique sound.

We've heard from experts advice before taking this step, and the answer was clear and unanimous: move forward. So here we are, with the target focused on getting our first full length out of the box in order to reach everyone, everywhere.

You can help by contributing in different ways, we have provided choises of all kinds for all interests and budgets.

For the shyest, a contribution of 10 euros to download the LP.

For those not too convinced, a contribution of 30 euros to download the LP and tickets to attend the presentation concert. Also, a clothes pin, which never hurts. This is certainly one of the most attractive options as its actual value is more than 50 € (10 € Digital Download + 20 € CD + 20 € Concert tickets) and you also get the signed album.

For the adventurous, there are several options starting at 50 euros in which you'll also get the signed album, tickets to the presentation and a special mention in the CD: appear on the cover or back cover of the album (50 Euros contribution), the karaoke version of the CD and a band's merchandise pack (75 Euros), attend a one day LP recording session (100 and 150 Euros) or a private rehearsal for you and a friend (150 Euros). 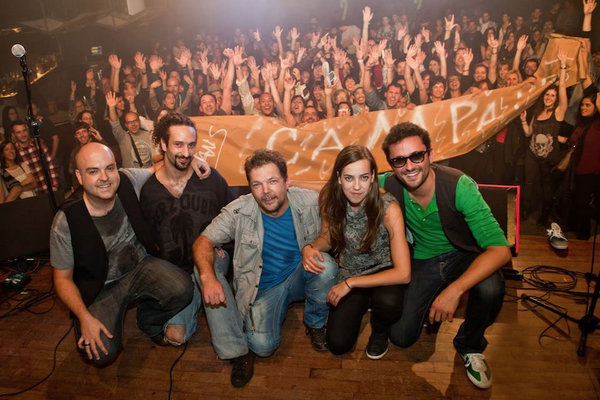 But there's also room for those who always want more. For those who are more than bold. We don't know if you're crazy, passionate, an hysterical fan or if you just have a sixth sense which tells you that you're taking part of the most ambitious project in the current music scene. If that's you, you'll get what the shy and bold do but also a role in a song video clip (300 Euros contribution) or also a private acoustic concert (500 Euros contribution).

And for you, the craziest, you take everything. An electric concert, whenever and wherever you want. We only ask 1000 Euros. We are not giving it to anyone else, only you, for gambling so strong.

Verkami's campaign lasts 40 days, so if you want our LP to become real, don't think it much. And if you are eager for us play for you, go ahead. These options will be highly demanded. We don't want tricks or resales among you, that's too bad.

Although we've already explained most of it, at the right area of this page you'll find the details for all contributions and the number of backers each contribution is limited to. No pressures, choose the one you like. We like you all equally. Or at least we'll try to.

As you read this through, we are already working in the pre-production of the LP. We're finishing cooking the new songs and optimizing the tracks on the EP that will be included on the CD.

We are starting the recording of the album the 1st of July this year, aiming to have it ready by the end of October. Some rewards may be delivered during this period but most of them are to be received between late October and early November.

If everything goes as planned, by October 15th we'll have the LP in our hands. And you'd have made it possible.