Currently the Can Vies CSA (Autonomous Social Center) with over 15 years of life is under threat of being evicted by the property owners, TMB. So we turned to the social network of the neighborhood to launch the #SomCanVies campaign to stop this action. We call for solidarity and support 2 help us.

The Can Vies CSA (Autonomous Social Center) is a squatted space with over 15 years of history in the Sants district of Barcelona. It has become the backbone of several social, laboral and anti-capitalist movements and struggles. It has also become a center of cultural creation, hosting projects such as La Colla Bastonera de Sants, and other musical and theatre groups.

Currently this project is under threat of eviction. To stop it, we started the #SomCanVies campaign in conjunction with the social network of the neighborhood. (#SomCanVies means #WeAreCanVies)

We call for solidarity and mutual support!

Help by spreading this through Internet, mobilizing in the street and, at this present case, financing this campaign through crowdfunding.

All grants are important because together #SomCanVies! They shall not pass!

Facing such a campaign has some associated costs.

We have always been independent and unrelated to any grant or institution. We have always sought the way of self-financing the project, but unfortunately we have often had to resort to the sale of alcohol at parties set up at our space, which generates contradictions with our commitment to models of non-consumption leisure.

This is why we see in crowdfunding an opportunity to innovate and continue enhancing our alternative models to manage our collective spaces. We want to use it as a loudspeaker for our claims. Several projects involved in the community center have previously used this platform successfully, for instance La Ciutat Invisible cooperative, AT Versaris Hip-Hop band or Pirat's Sound System, a band that was born in Can Vies and encouraged creating the rehearsal studio.

With this Verkami project we want to ask you for charitable contributions. The 1500 € minimum asking is symbolic. It would be equivalent to the materials derived from this first phase of the campaign that is already active. Basic things like posters, banners, audiovisual material, and all sorts of material to stir up the streets.

But this is not enough!

Recently, because of the general strike on March 29th two members of the CSA went to prison, wich added to the other activists in our neighborhood of Sants has meant a heavy expenditure and our resistance box has been quite affected.

Therefore, we would like you to make yours the @SomCanVies resistance, and we want your help to overcome the minimum figure that we have set in order to cover economically both the campaign against a possible eviction, and to further deepen the projects that give life to the CSA.

In 1997, after holding a protest parade, a group of young people decided to release the unused building located in number 42 of Jocs Florals street, at the district of Sants in Barcelona, to open the current Autonomous Social Center Can Vies to solve the lack of space in the neighborhood. Soon self-management, autonomy, mutual support and grassroots horizontality became the form of relating, to organize and manage the day to day.

It has gone through three eviction attempts by the Transports Metropolitans de Barcelona (TMB) and its main shareholder, the Barcelona Council (Ajuntament de Barcelona). Can Vies has emerged victorious from all three, with the support of people in the streets and a good legal strategy. But TMB and the Council returned are fighting back again. In March 2011 was held the third court case faced by Can Vies in its 15 years of life and activity. After a favorable ruling for Can Vies, now the Provincial Court wants to support TMB, who owns the building, overthrowing 133 years of the building's history and 15 years of self-management.

Throughout these years, Can Vies has proved it's essential for the neighborhood and the city to hava a space away from the government's and the market's supervision. They have carried out many projects to denounce social inequality, labor exploitation or speculative processes that disfigure neighborhoods. They have also created other forms of life, popular culture, links of solidarity between people who have built and tested alternatives in social, work, leisure and nonprofit consumption .

Can Vies, together with the District Assembly of Sants (Assemblea del Barri de Sants ABS,) achieved the popular festivals in the Parc de l'Espanya Industrial. Can Batlló, a former factory now set for self-management by La Bordeta's neighborhood, wouldn't be possible without their squatting baggage. Community publications such as La Burxa -created in Can Vies- would not be possible, nor would cultural and popular projects such as La Colla Bastonera. The struggles in defense of the territory by groups such as Jóvens de les terres de l'Ebre would be more difficult without a space like this. A space that is not isolated: it is part of the varied and complex social fabric of Sants and Barcelona. Creating a dense network of mutual support has proven repeatedly that we can all together. And that is not pleasant to the power.

Barcelona's CIty Council argues, to justify the eviction, the need to demolish the building to build the new Mercat Nou metro station. But reality has shown that the reason is false, since the station has already been built without the need to knock down Can Vies. Now they are ofering another argument to justify the demolition: the development of the "Drawer of Shame" which will cover the open air railway, yet the plans show that it can be done without removing Can Vies. These reasons, defeated by facts, prove that the real purpose for wanting us out is because it bothers politically and socially in Barcelona's trademark, the Barcelona of budget cuts and postcard happpiness.

Therefore we ask for your solidarity in the process that Can Vies is going through. Solidarity through financial contributions that you can make from Verkami, support also by spreading the situation at Can Vies CSA and participating in all the calls that we make.

The next call is a demo marked on Saturday October 20th at 11:30 am at Sants Square (Plaça de Sants, Barcelona).

And for those who want to work but the distance will not permit it, it will always remain to participate in this Verkami project. From CSA Can Vies we remain independent and self-managing in all respects for all practices. Campaigns such this sundries many different materials and can be very long.

All contributions, for small they amy be, are importants, as are spreading actively engaged Can Vies project or helping to finance them through Verkami. We are confident that with your support not only achieve the goal of reaching € 1500 but beat it. That would give us more autonomy, enhancing economic new campaigns, new projects.

They shall not pass!

We also put in your hands rewarded investments in different parts of the district of Sants. Collecting rewards will work the same way as online with Verkami. Places where you can find the physical stakes, where you give your support following easy instructions, are the different calls in defense of Can Vies CSA such as the demonstration on October 20 at 11:30 in Sants Square, the cooperative bookshop La Ciutat Invisible, Malea teashop, and Casal Independentista of Sants.

Once the 40 days of the campaign at Verkami finish, and only if we reach the goal of 1500 euros, we will contact you to tell us how you would like to receive your reward. For those who choose one of the "collect" options, you can do it at the party we'll be hosting in December (date to be confirmed) or at some specific places in the neighborhood. For shipments outside the Peninsula, a COD payment will be needed to cover shipments.

RAP SONG calling for the demonstration on October 20:

REQUESTS the authorities to stop the eviction

You can participate in the campaign against the eviction of the Can Vies CSA through this Oiga.me to say to TMB managers and Barcelona City Council that we don't want the Can Vies CSA eviction. 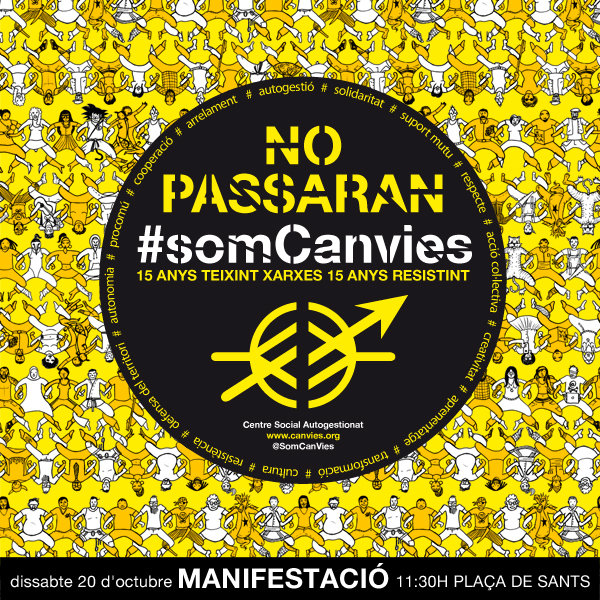