A mighty artifact is hidden in a forgotten temple: will you be able to find it by overcoming the pitfalls and monsters that guard it? 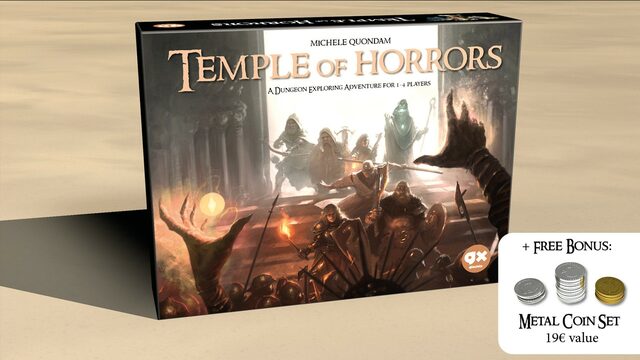 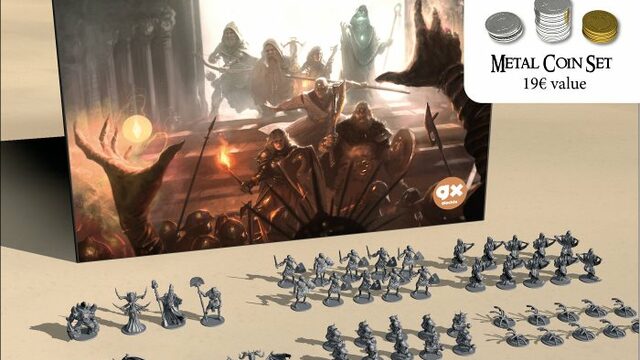 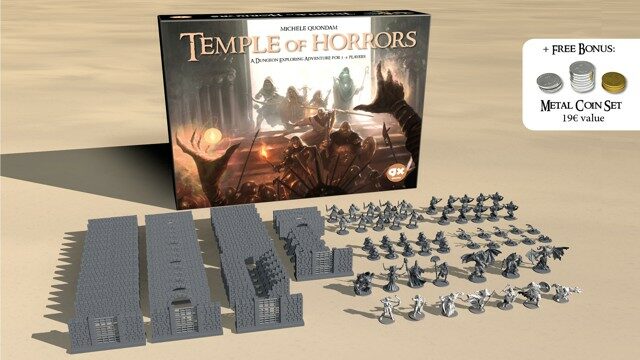 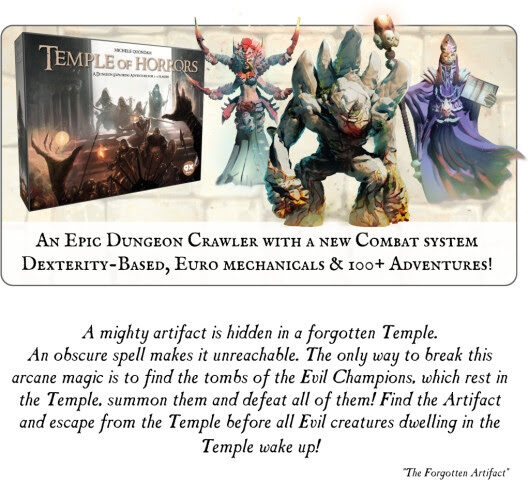 Temple of Horrors is a game by Michele Quondam (Trinidad, Medioevo Universale GX, Virus, Romolo o Remo, Gladiatori, and many more). It is a game for 1-4 players and lasts about 90 minutes. Mirko Failoni and Arianna Geloni created the fantastic game illustrations, and Filippo Giovannini sculpted the miniature models.

A successful campaign has already been done on Giochistarter and Gamefound for the Italian and the English game version. Here we want to unlock the Spanish version! English version is available too.

We need you to be able to produce this great boardgame! Don't miss it: 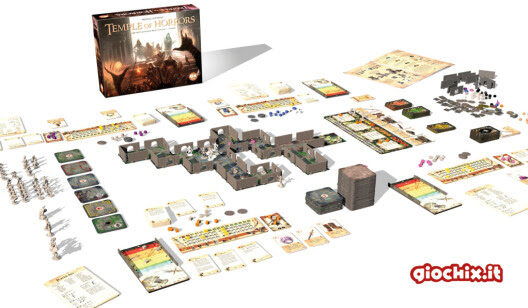 Here is a quick overview of the most important new features of Temple of Horrors. You can see the videos below or read the beta rules for more information.

In the pledge manager you can add miniatures to the base game by buying the specific addons or directly buy the ALL IN reward, which includes all:

Players must face a Dungeon. Many Creatures dwell there. Minions Creatures (Goblins, Spiders, Skeletons, and Specters) are the less dangerous monsters, but they are many! Elite Creatures and Leaders are more challenging and appear when too many Minions have been alerted. Finally, Bosses represent a considerable risk; they usually guard a place and have unique and mighty powers!

Players create the Dungeon map by placing Room tiles from their Room display.

It’s essential how Room tiles are placed: placing many Rooms connected of the same colors, players can activate Clue Rooms and Tomb Rooms. Both Rooms (Tombs can be activated by killing the Boss) drop Clues. Clues can identify a specific Room tile where something important is hidden (an Artifact, a Prison, a Treasure, etc.).

Other difficulties will challenge players! For example, a sudden crash of the temple roof can block the Heroes, or maybe some mysterious presence can whisper, “The way is shut!”. It works like a treasure map: moving on the correct line, players can reach the final Room and activate the Exit.

The same Map card can show the Guard Posts, where a Pack of Creatures dwells.

There are seven Heroes: Barbarian, Cleric, Thief, Bard, Mage, Monk, and Ranger. Each Hero has a card deck, in which each card represents a unique Power. Players start with an active card and can purchase new cards during the game, spending their Experience Points. They can also upgrade their active cards by turning them to the other side. Each Hero can own Items, which can be found in the treasures or purchased from an Item display, paying them in coins.

Time to create a Heroes party, set up the game, and choose your Adventure!

Select an Adventure from the Adventures Book: There are 5 levels of difficulty (tutorial, easy, medium, hard, and very hard). Choose the game modality: Cooperative or Pvp (with a traitor).

Read the adventure intro and apply its conditions to the game. Then each player chooses a Hero. Place miniatures or standees at the Dungeon entrance (or where the Adventure requires) and start to play! 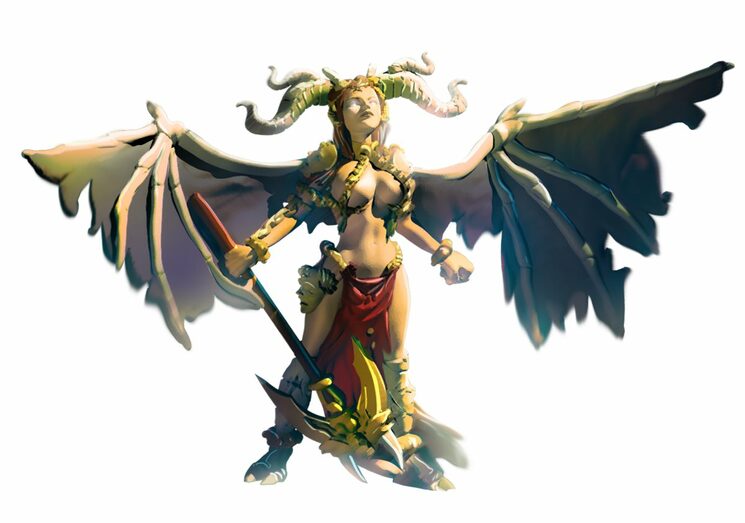 About the PvP mode. In this modality, there is a chance that a player is a traitor, but this is not sure. The possible presence of a traitor brings an Rpg flavor to the game! Players start to speech each other, trying to understand their real nature. There is always a hidden competition between players to find the best items or gain a powerful spell, or a higher level. PvP mode introduces this individual aspect, no matter if there is not a Traitor in the group, and the tension created is very similar to what you feel playing an Rpg, like D&D.

How does it work? All players draw a Pvp card at the game setup, and the card says Hero or Traitor. The Pvp deck comprises X Hero cards and 1 Traitor card, where X is the player number. So maybe all players are Heroes.

Traitors have a different final aim. They must collaborate with others to reach common goals, but in the end, they have to reveal their real intention and act at the right moment.

Each game lasts a maximum of 18 rounds (called Hours). Each round, your opponents become stronger and more numerous: The track on the Hour board changes color from green, yellow, orange, and then red. Players place Encounter miniatures on the Hour track: the subsequent encounter with the same opponent will reveal a stronger Creature (Elite monsters, Leader, and finally a Boss). 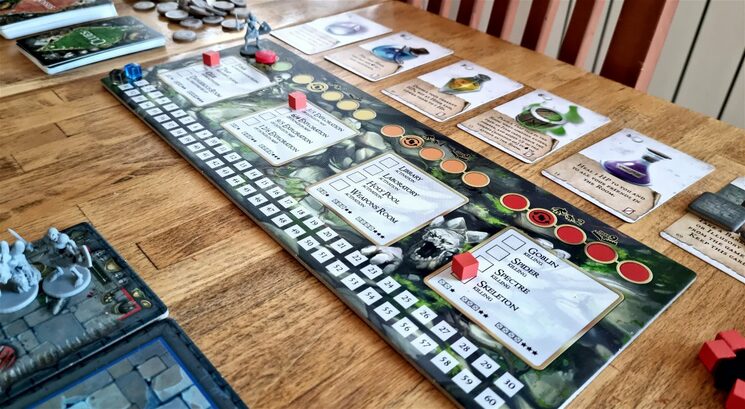 The Adventure will ask you to do something: free a prisoner, find a precious artifact, kill a specific Boss, find the exit, etc. In addition, there are several Side-Quests: you have to update the Hour board Side Quest section when you complete them.

You have to explore the Dungeon looking for it.

There are two ways to find this: collecting Clues or using a Dungeon Map. The first way allow you to collect Clues cards. Each card has a sentence that will enable you to select some specific Room in the Dungeon map. With more cards, the selection will be more restrictive to target a unique Room. The second way will require you to follow a specific path of Rooms in the Dungeon map to find the final one, which represents your target Room.

There is an Initiative order, and players act following it.

To determine the initiative, you must roll players cubes (1 each in the player color), plus 1 cube for the Creatures and 1 for Melee Combat. Then put them in a line following the North-South dungeon direction, and you have it!

You can do several Exploring Actions, or if you are fighting, a Combat action.

Exploring actions are: Move, Activate a Room, Use a Power, Open a Breach, Modify the Room, Take a Breath, Attack from a distance, or make noise. More noise you will make in the Dungeon, and more Creatures will wake up. 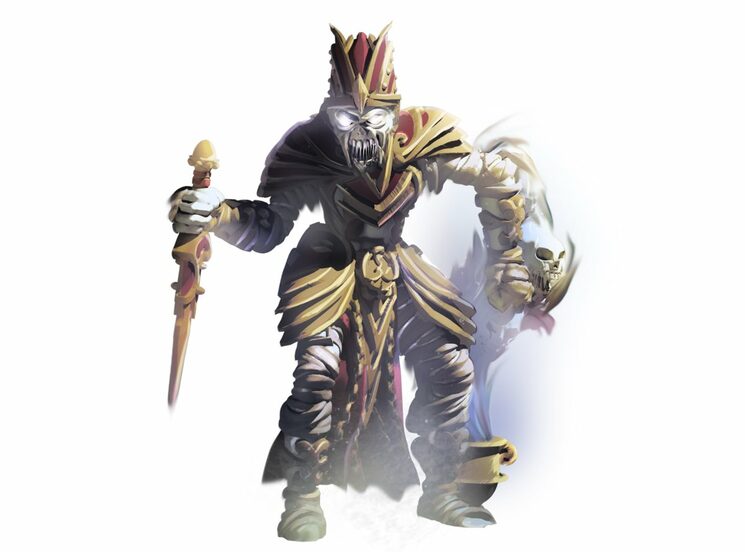 There is an Encounter system that depends on noise. The Adventure will also add specific Rooms with Creatures (Guard Posts) or unique opponents to fight.

The Combat system uses characters' abilities and powers and a Combat board-rolling system where the Mana cubes are thrown. You can roll cubes together, one at a time, or place them on the board and hit them with your finger. You can also try to push a cube with another cube or move out one that doesn't suit you. Mana cubes are helpful for many things, so don't waste them!

Depending on the results, you will inflict damage points and gain dodge points, allowing you to avoid Creatures' attacks. Many character abilities will enable you to modify the results obtained. The rulebook also includes a Combat variant with no dexterity modality for those who don't like this kind of mechanical. Check the rulebook for further info.

Killing Creatures will allow you to gain Experience Points (XP) and Treasures. You will spend XP to gain additional Powers and Skills for your character, while Treasures will provide you with mighty magical items.

ToH can be played in a single game or a Campaign modality, in Cooperative Mode, or PvP mode. For more info about the gameplay, please read the beta English rulebook. 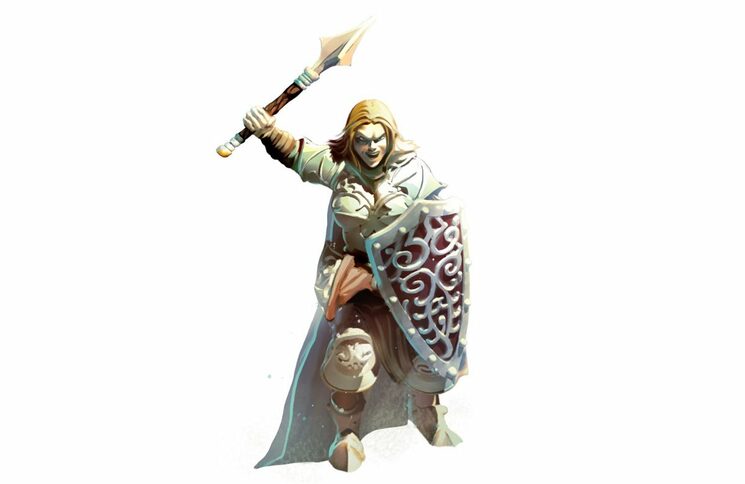 You can collect your copy of Temple of Horrors for free at the Essen Fair (German, October 2023), if available in time. Alternatively, we can ship it to your home with courier service for 22.95 euros.

We will start to ship games in November-December 2023 or as soon as they are available. Remember that given the international situation of production and transport, this date is entirely indicative.

For more info about this campaign, please check the main campaign at our website: https://www.giochistarter.it/scheda.php?item=1004234 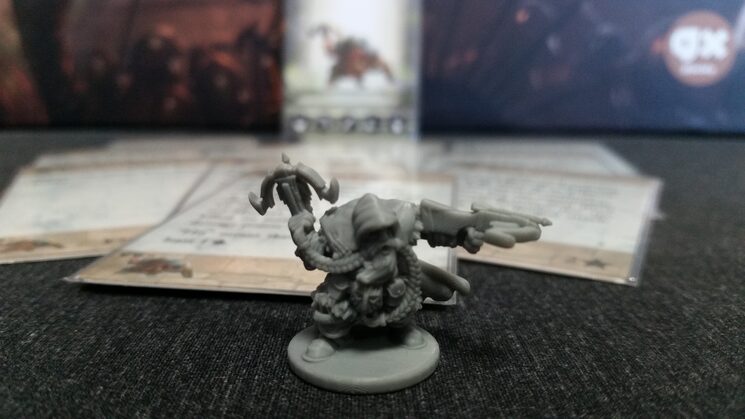 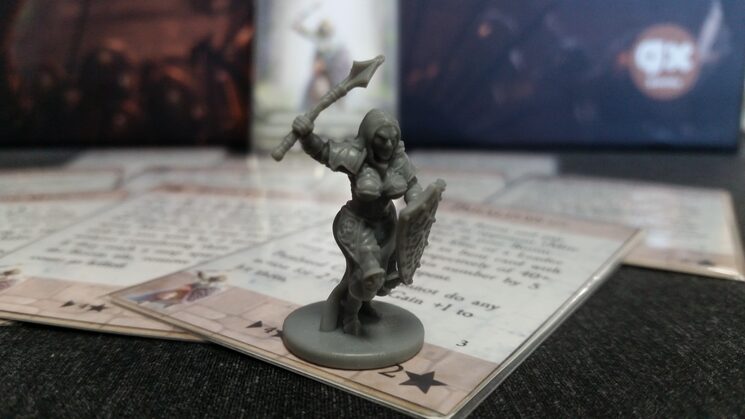 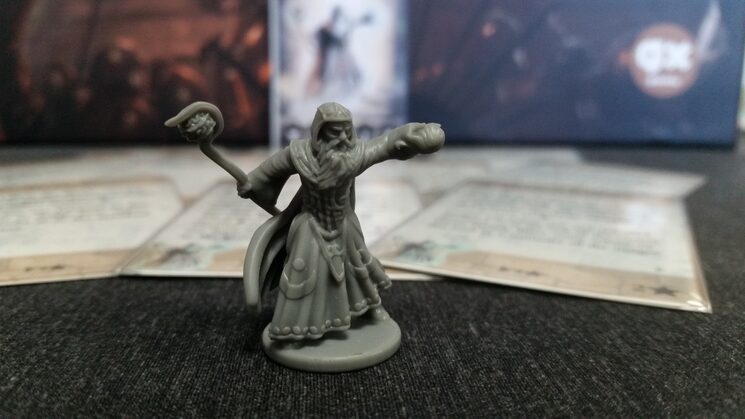 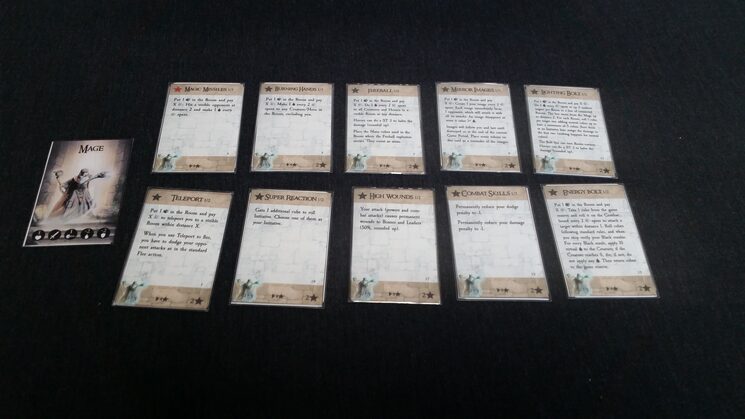 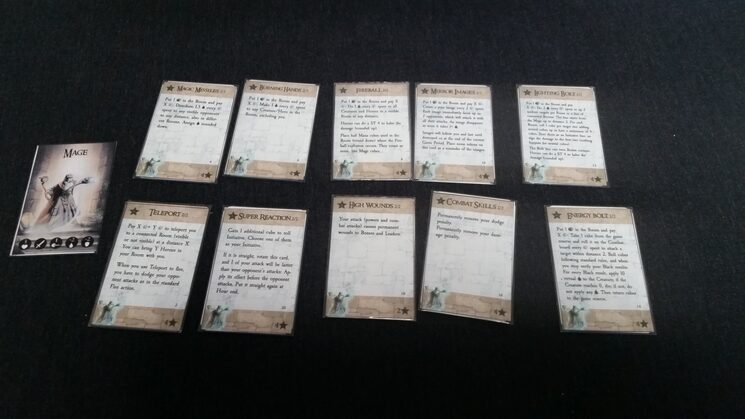 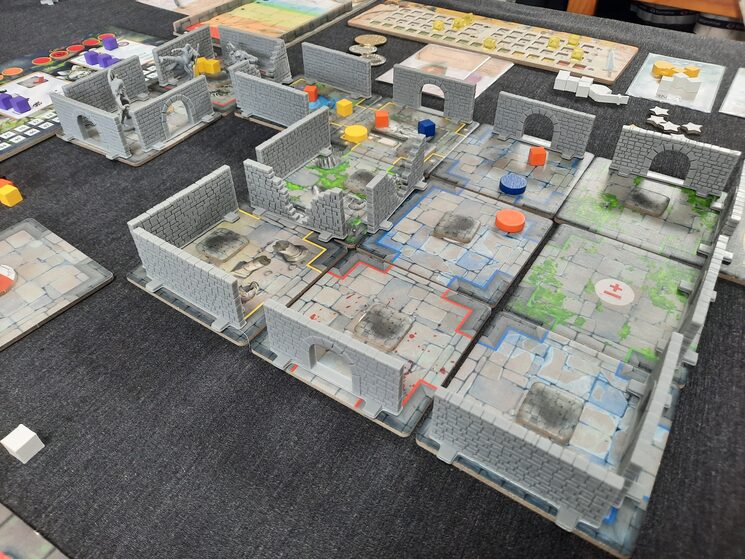 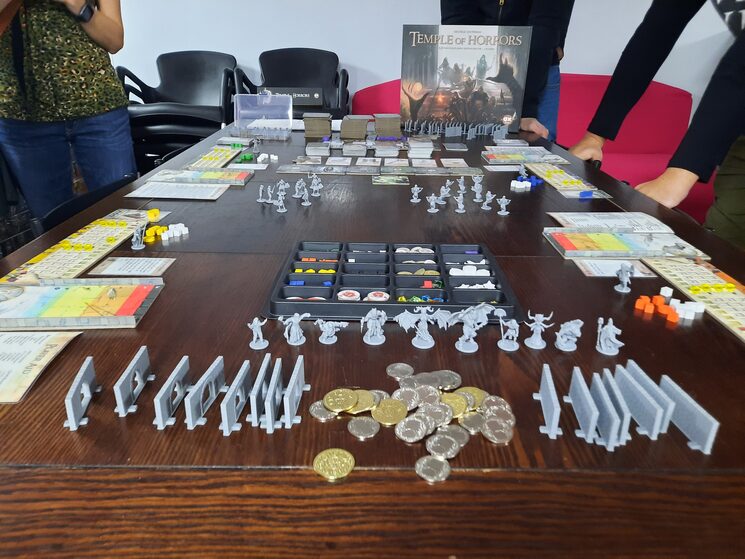 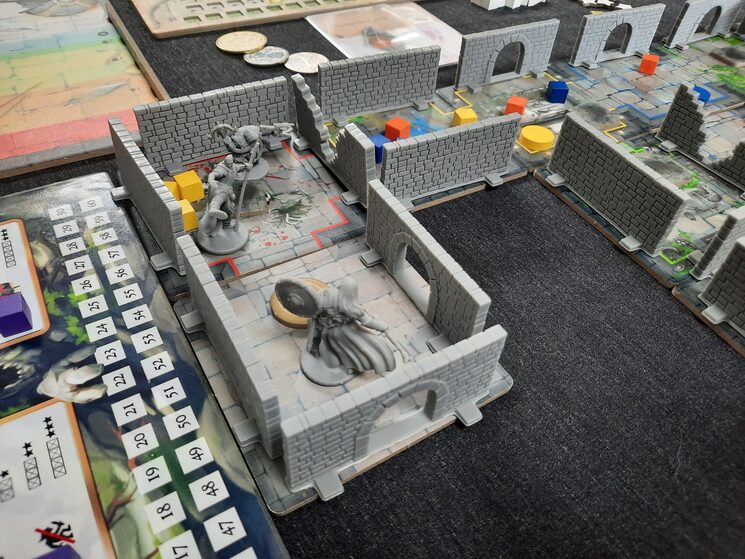 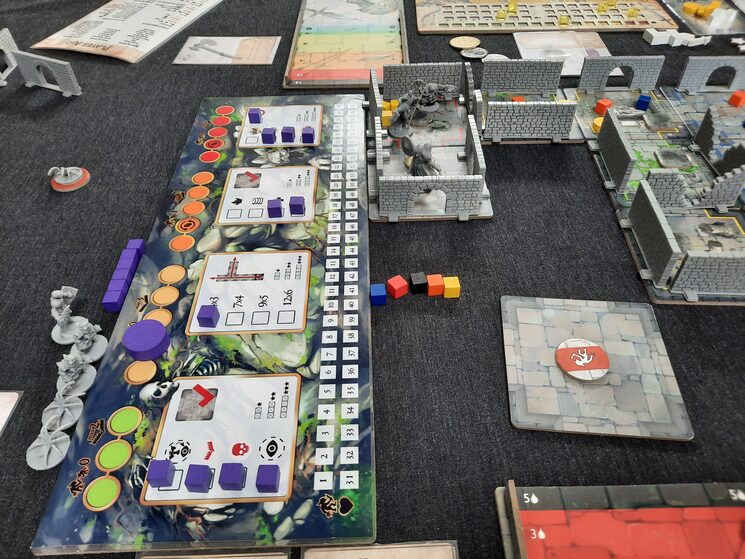 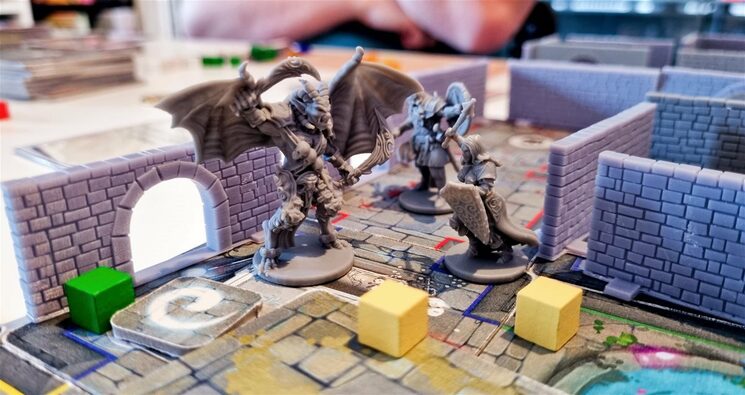 Not in my Game 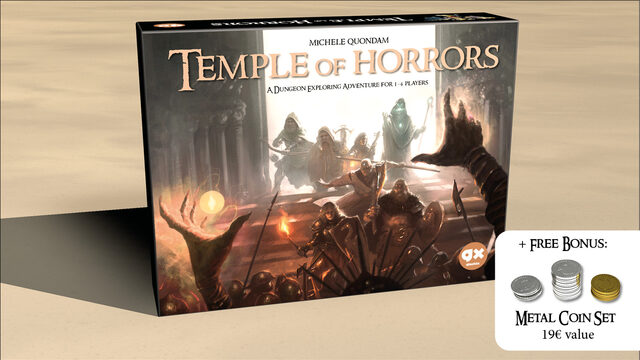