A collection of punchy, heartfelt, classy and sassy theatrical pop-rock songs that with your support can be let out in the world.

PLUS the whole shebang

Greetings! I'm Elle, a singer/composer/performer from Ireland based in Barcelona. Over the course of the summer I headed into the studio with the bandmates and producer to record the first full-length album of my music career.

I wanted this production to be bold and I am so thrilled to have worked with such an incredible team that made this happen during the recording sessions.

At this moment I am an independent artist, meaning that there is no big label behind my work and self-funding an album entirely by myself just isn't an option. COVID-19 has been a hard blow and I need your support with this campaign to help me cover the remaining costs, get this bad boy out into the world and get closer to doing what I love for a living. 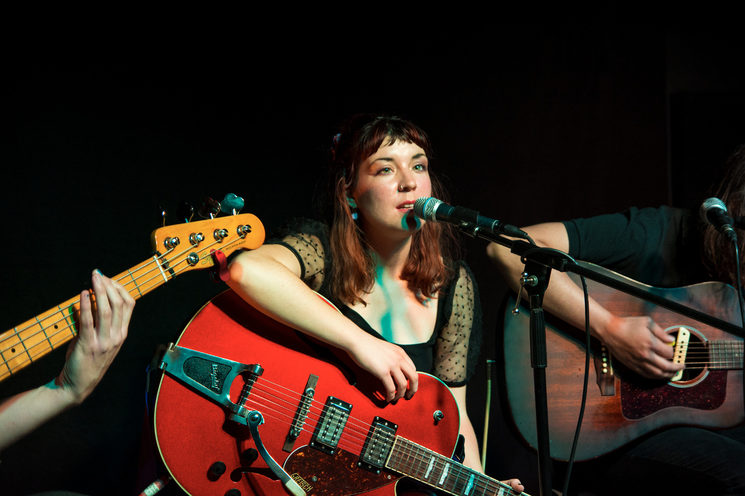 is the title of the album, (I'll get into that in a bit..) and it's my second and more in-depth venture following my debut EP Heart to Hearts release in 2020. The record tells the tales of mini alter-egos, my most vulnerable self, and a few characters (in every sense of the word) who've played starring roles in my life.

The songs were produced with maestro Víctor Valiente and recorded in La Masia Music Lab (now one of my favourite places ever) by Josep Vilagut. The studio is on up-hill land in Mollins de Rei, Barcelona, where we recorded all day, ate, even slept some nights. The uniqueness of the studio/house and the nature and animals surrounding it were huge reasons to why I chose this place for the recording. We were made feel right at home :)

This time round, I had a clearer vision than I expected regarding production and Víctor brought that to life. How he instructs musicians, investigates sound, listens and contributes with brillaiant ideas is incredible and I'm so grateful to have him on board!

The sound is raw and confident with moments of light and shade. I consider it sassy but classy theatrical pop-rock but I'll let your own pair of ears decide what it is to you.

I'm one lucky gal to have counted on a group of mighty musicians for this album!!! <3 A joyous and admireable bunch of humans who are a delight to play music with.

There will be rewards of all shapes and sizes for participating in the campaign :) Including...
· Digital download The Musical (before the official release)
· Vinyl copy The Musical
· CD copy The Musical
· Tickets to an upcoming gig
· Personal thank-you note
· Private home concerts
· Private streaming concerts
· Singing classes
· Handwritten copy of lyrics & chords
· Mention in album credits

(IMPORTANT - rewards such as physical copies and merch will be given out personally, either at a gig or whenever we see each other! If you live outside the E.U, send me an email @ elleleonmusic@gmail.com and we'll arrange the best way for it to get to you :) )

OK I'm a sensitive, fiery and driven small-town girl from Ireland with big dreams :') I grew up in a town called Kilcullen where, getting back to the album title, I began to perform as a kid. It all started with, you guessed it, musicals. I took part in theatre groups and local performing arts schools where I'd sing and dance my heart out. There was nothing more magic and no place more exciting and accepting as those weekly classes.

Fast forward a little over a decade and here I am in Barcelona, writing songs. During the process of this album and over the lockdown period I found myself going back and finding that joy again in show tunes and I guess you could say I started using my own voice in a more theatrical style rather than folky or singer-songwriter like. It seemed most natural and comfortable for me.

I believe in authentic expression and hard work.

What I need the money for

All attributions will go towards the cost of the following:
· Mixing
· Mastering
· Physical copies
· Music videos
· Promotion
(If we reach more than the goal of €3.500, I can put money towards renting a decent venue to play a special presentation concert, future merch, better promotion..)

Achieve funding goal, shoot music video for one of the singles, manufacture physical copies of "The Musical", posters, badges and lyric booklet

Digital download of "The Musical" available for patrons of the campaign.

Shoot music video for one of the singles, I start sending out rewards. <3

Here are some links to my Spotify and social media accounts so you can follow the project :)

THANK YOU THANK YOU THANK YOU!!!! Mil gracias everybody for supporting this album. This wouldn't have been possible without your help and I can't wait to share it with you when it's ready. 💚 We are currently in the process of mixing the album and getting some wonderful music video planning done and I'll be starting to prepare and plan your rewards :) sending updates via email REAL SOON.

Lots of love and lots of MUSIC ❤️, Ye are the best, this is for you! 💿

PLUS the whole shebang