Hello! We're two friends that are going back to Kenya to film a documentary as our final proyect for Univesity, would you join us?

¡Thank you so much, you make us very happy!

¡Thank you so much!

It includes the link for the documentary

Go to the Premiere in Madrid or Pamplona with the directors. 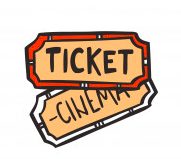 Get 4 tickets for the premiere with the directors

¡¡THAK YOU!! We'll send you a sweater with the logo

KARIBU is a documentary that wants to show, from a more intimate point of view, different communities, tribes, ethnic groups... of Kenya. It tries to show their cultures and lifestyles

Hi there! We are Belén and Amaia, we study Journalism and Audiovisual Communications in Madrid (Spain). In our second year of University we went together to Molo (Kenya), to a school called Chazon Children's School were we stayed 20 days. There, our goal was to help in whatever they needed, but what actually happened was that we learnt from the, enjoyed and loved our travels trough the country on the weekends and left wanting so much more, we knew that Kenya had much more to offer us than we could offer "her". 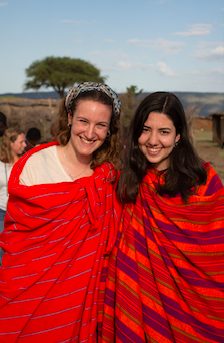 This year we would finally be done with our degrees and for that we need to do our Final Project. Because of that, filled with excitement, we're going back to Kenya on the 18th of October to film this documentary. To live an unforgetable experience, inmerse ourselves in their roots and film all of it to share it with you!

The rewards are cumulatives, which mean that we we give you in, for example, pack numer 3 would have whatever was offered in packs 1 and 2 plus something else!

The bags with the Africa foot logo have been being sold since August to raise money for Chazon Children's Centre, we're we would go on the first weeks of our trip. As they were very succesfull, we decided to include them on our rewards and design also sweaters with the same logo:

Where does you money go?

All the money raised through Verkami will be invested in all production needs that would come up during the trip. It will mainly be used to get the equipment needed to do the documentary: sound, lighting, filming...

If we were to raise more money than we need for producing it, we'll invest it in Chazon.

With this project we want to get a little closer to this incredible country, get to know some of it's villages and communities such as the Maasai, Kikuyu, Swahili... and leanr from them.

The idea is to create a documentary based on the observation in order for you to able able to live, as if you were there, the magic of this cultures and communities. We want to use our cameras to show an intimate reallity that we would uncover as the trip goes. We would let ourselves be surprised so you can be surprised too.We want to capture their rituals and traditions most ancient and try to show the inmense diversity of cultures that find shelter in this country.

September 1st - October 17th: Pre-production, getting everything ready for the trip, researching and raising money.

February 17th - March 4th: Process paperwork to present it as our final proyect and getting a date to deffend it.

March 5th: Defense of the project.

Our experience in Kenya on 2017

On 2017 Us and two other friends from university went to Chazon Childre's Centre. When we arrived ther we discovered that there was still so much to do and so many project to help at, but they were on the right traks. We found out that Molo was a village that has achieved to carry on with the little resources they had.

Every morning we would visit the school and help in the kitchen, teaching or whatever the teachers could use uor help at. In the evenings we would go the orphanage and play and help the kids with homework or house chores. On the weekends we travelled the country but we left wanting to see so much more, know more villages an specially meet more people which was what made us fall in love with the country, apart for the amazing sunsets and scenerys. And we think it, the people will make you fall in love too...

Here are some pictures from that trip!

If you want to know a little bit more about us and our project here are some links to our social media profiles:

To learn more about Chazon: www.chazonafrica.org

THANK YOU FOR YOUR INTEREST, BEST REGARDS!

If you want any more information you can email us at karibudocumental@gmail.com

¡Thank you so much, you make us very happy!

¡Thank you so much!

It includes the link for the documentary

Go to the Premiere in Madrid or Pamplona with the directors.

Get 4 tickets for the premiere with the directors

¡¡THAK YOU!! We'll send you a sweater with the logo