Enroll into the Dirty Army files

To continue bringing happiness and love in so many homes with our new LP "Living in Death", we need your collaboration. Help us!

A little bit of history…

Dirty Army was conceived in a trip from Madrid to Malaga in which Javi Mauriño (rythm guitar and singer) after a year of studying and working in the capital, started back home.

By the way (and with his hands free), he spoke on the phone with Tomás Mérida (drums) and then with Alejandro Castilla (solo guitar), calling them to a "meeting" so they could meet.

Finally the ¨meeting¨ was a success (At the second beer Tomás and Alex already insulted Javi together) and a few weeks later they already had a place to rehearse in Málaga.

A few months later the band was completed with the fourth member, Mr. Jorge Lara, in charge of the bass.

Obviously Rock is a hard road to travel, and as you do not live of this (at least we) the work rules, and precisely because of that the rhythmic section of the Dirty Army has changed a couple of times. Tomás was replaced by Dani Vivar on the drums, and Lara was replaced by Boke Tejero on the four strings, with whom the first LP "Dirty Army" was made, published in February 2017.

Once again the vicissitudes of life again made a dent in the band, (which seemed to be unlucky) until finally, the young Álvaro Olmo (bass) and the intrepid Jesús Gómez (drums) entered the files of Dirty Army, stabilizing and renewing the band, just in time to start working on our second album.

About the Project ¨Living in death¨

As in our first and only one album, we have opted for self-management. As things work nowadays and taking into account the current panorama of the industry, we have decided to make a "Juan Palomo" and trust in ourself and in our aptitudes to conceive this second work. So, following the path of DIY philosophy, we agree that nowadays we can carry out our aspirations through our own means, despite the headaches that this entails and the hours of effort involved.

In this second work called "Living in death" we have drawn a line that separates the classic sound of alternative rock and Stoner rock that defined us in the past in a more mature and evolved way, in which you will find sounds and incursions into other horizons that we are very excited to show you.

Here is our first single "Nothing to say" that we published as an advance:

Destination of the contributions

As we have explained, the process of self-management has led us to look for all that entails designing this project. So the money collected among all will be destined to:

This is the artwork that has been done by the great KANTZ (The Braves Church) for our new LP:

Once the campaign is finished (and hoping to have achieved the objective), we will have a time to outline the details of the rewards, (sizes, models, shipping addresses, etc.) for which we will send you a form, and while these details are outlined , all the patrons will have the anticipated digital download to be able to practice for the live shows.

These are the rewards delivery dates:

All patrons who have purchased rewards with ENTRANCE TO THE PRE-PRESENT CONCERT will receive their rewards at the preview concert on Saturday, February 2, 2019 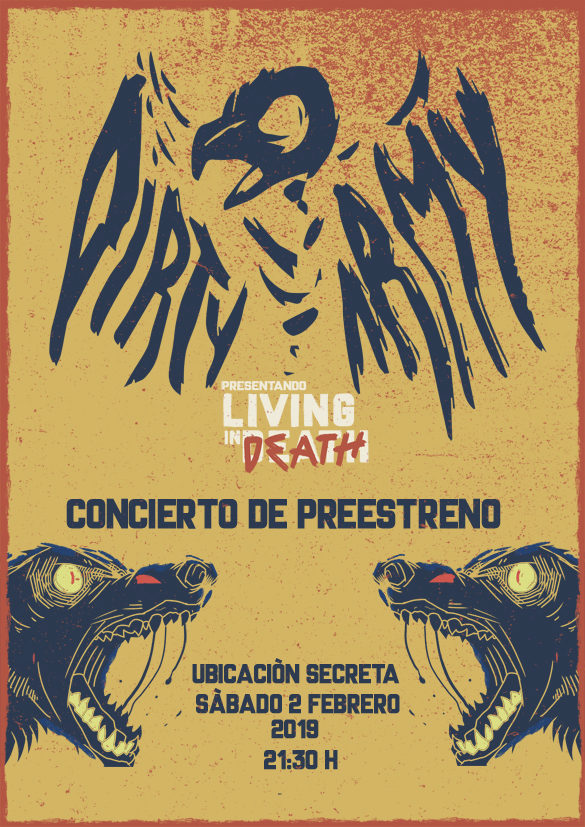 All patrons who have acquired rewards with ENTRANCE TO THE PRESENTATION CONCERT will receive their rewards at the presentation concert on Saturday, February 16, 2019 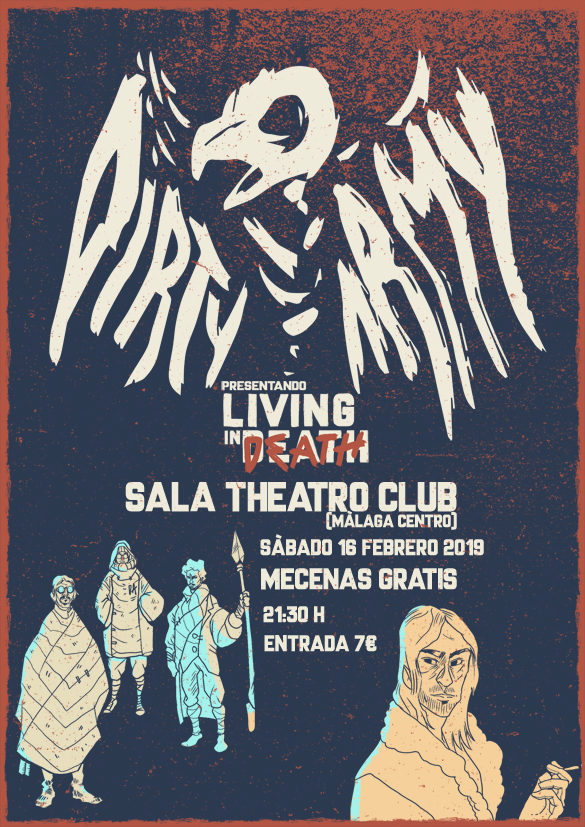 The rest of the rewards will be sent the same week the presentation concert (week of February 11 to 17, 2019)

Here you have a small sample of some of the items that are part of the rewards: 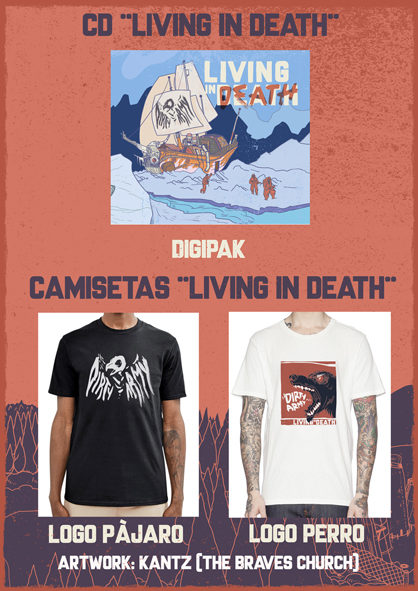 This is the cover of the 1st LP "Dirty army" 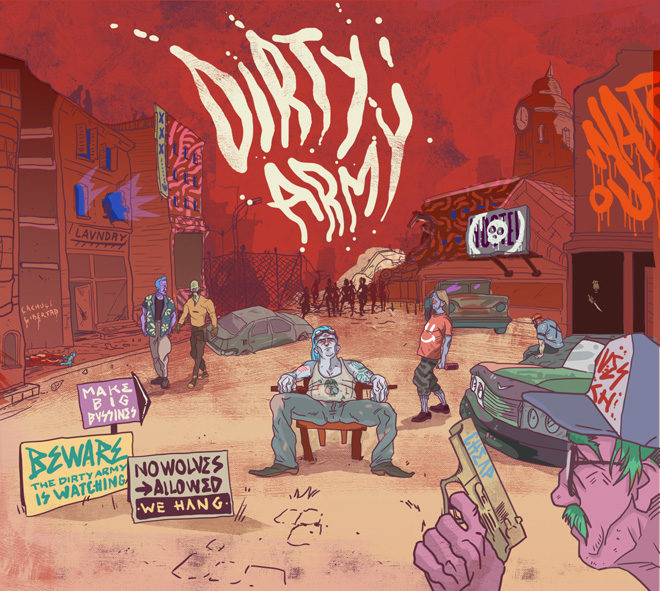 This is the shirt model of the 1st LP ¨Dirty army" 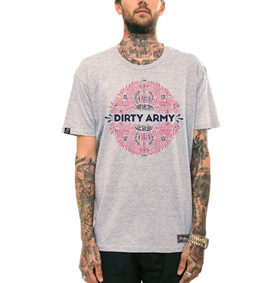 And now, what can you take home?

Listen to the album live before anyone else! There will be free snacks and refreshments (Your two shirts, your two stickers, your badge and your CD Living in Death you pick it up in the secret preview concert)

CD Living in Death signed and dedicated by the group

2 T-shirts Living in death (To choose between two models)

4 T-shirts Living in death (To choose between two models)

(If you are from outside of Malaga or you can not attend the presentation concert and you want to help us, we have put at your disposal the EXPRESS rewards, with deliveries to all Spain) 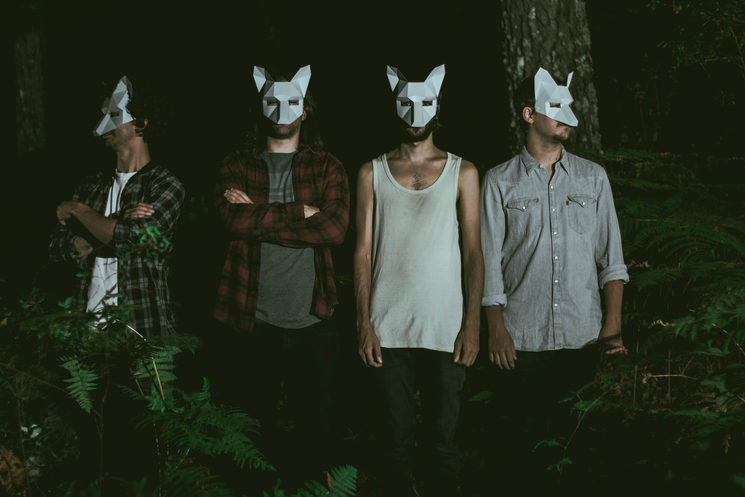