Contribute to the project
View project in Castellano, Català and Francès

Your name in the "thank you" section of the documentary credits.

Invitation to spend a entire shooting day jointly the documentary filiming team + Your name as associate producer in the film credits + Invitation for two to attend the premiere + 1 DVD + Digital download of the documentary (high quality).

Invitation to join us during the shooting period (accommodation included) + Your name as associate producer in the film credits + Invitation for two to attend the premiere + 1 DVD + Digital download of the documentary (high quality).

About the project Read more about this project 20 updates Community

¿WHAT IS m¡AQUÍ!s?
¡Aqui! (Here!) is the word expected by the many who suffered a grey era, a post-war era, a time of undiscriminated repression by Franco's regime. The only answer to the creation of guerrilla squads against fascism in the hills and mountains of Spain, a period in time ranging between the forties to the early fifties.

¡Aqui! is the mute cry of those who remained buried, a call that the research teams dedicated to the recovery of the historical memory tried very hard to hear.

¡Aqui! is where the memory of those long forgotten by public institutions begins. The memory of those who suffered retaliation without judge or jury, or were simply killed by a dictatorship used to hiding the truth.

¡Aqui! is where the end of the long mourning of their relatives begins.

m¡AQUI!s will be a documentary about the professionalism and methodology of the teams of archaeologists, paleopathologists and forensics. About the preliminary researches, about the recovery of the remains of the missing, about the reasons behind such disappearances, about the process of identification.

The documentary will focus on the experiences of the Paleolab group in the exhumations of seven mass graves found in the provinces of Teruel, Cuenca and Valencia, and their links to the memory and history of those buried there. Graves like the ones related to the events that took place in Gudar, a story about revenge and counter-revenge, a madness that resulted in the loss of many innocent lives. Or those that resulted from the application of the famous “escape law”, that was nothing but a legal excuse for a programmed execution.

WHY DO WE WANT TO DO IT?

Since 2006, some of the current members of Cremant Muses have been following the work of the teams dedicated to the recovery of the historical memory of that time of maquis presence in Spain, establishing relationships with groups of families and other organizations like “La Gavilla Verde”, in Cuenca, “Pozos de Caudé”, in Teruel, or the Group for the Recovery of Historical Memory in Valencia.

Now that is quite possible that the grants dedicated to this kind of work are going to disappear, we believe that is time to look back, using all the research and audiovisual material and planned new filming to show the more humane side of the men and women involved in this work.

The recovery of the historical memory, beyond any particular political point of view, is a humanitarian action that has its more direct impact on the families of those who disappeared and it is performed with the utmost professionalism and impartiality by the experts involved.

HOW ARE WE GOING TO DO IT?

We will be using audiovisual material collected over all these years working along with the research teams, as well as recording new material to complete the stories linked to each one of the interventions to give the final product the focus, vision and aesthetic we're looking for.

WHAT ARE WE USING RHE MONEY FOR?

We have planned a 7-day shooting in locations on Cuenca, Valencia and Teruel. .

The money will be used to cover the needs associated with the production process, as well as for the post-production of the film: materials, accommodation and transport, as well as the rewards for this campaign.

WHO ARE WE?
Cremant Muses (CM) is a non-profit organization that works to promote the audiovisual culture and supports the creation of new audiovisual products. Our main principles are:

Commitment and dedication: members of CM share a passion for audiovisual creation. It is this sentiment that motivates us to collaborate in the various activities that the organization develops, as well as requiring from us our maximum efforts to carry them out, beyond any personal or particular objectives.

Invest the revenue: CM is a non-profit organization, and as such any revenue obtained in our activities is invested in developing new ones, or the resources needed to do so, always trying to be in line with our objectives, always trying to achieve larger goals.

**Respect*: subjectivity is an inherent part of audiovisual creation. CM does not discriminate between tastes or particular judgments, respecting those who respect others, not choosing specific tendencies beforehand.

Quality: CM is an open system developed in a predetermined context. CM is aware of that fact, and provides its activities with the adequate quality level required by the people and organizations in that context.

The m¡AQUI!s project will be led by CM member Lican Esteve, who has been working along the research teams since 2006. 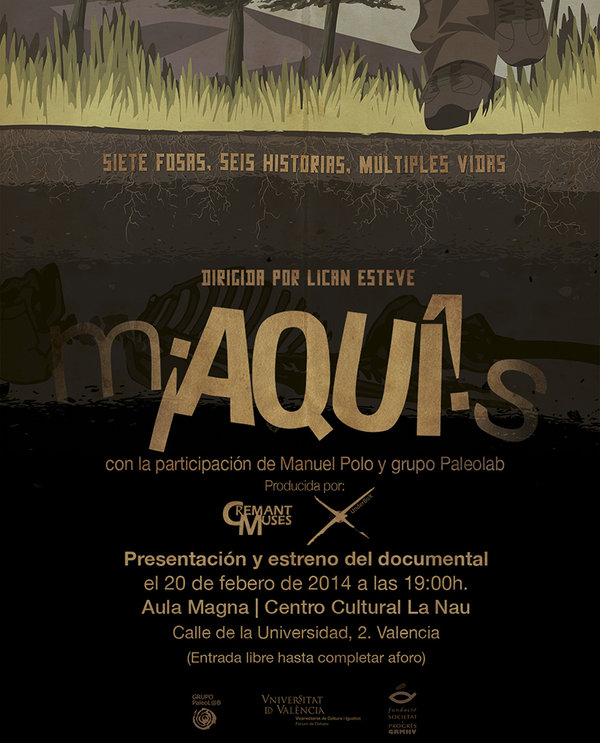 Your name in the "thank you" section of the documentary credits.

Invitation to spend a entire shooting day jointly the documentary filiming team + Your name as associate producer in the film credits + Invitation for two to attend the premiere + 1 DVD + Digital download of the documentary (high quality).

Invitation to join us during the shooting period (accommodation included) + Your name as associate producer in the film credits + Invitation for two to attend the premiere + 1 DVD + Digital download of the documentary (high quality).