Mp3 copy of the first three songs on the EP.
+ Entrance to the EP release celebration gig

Full album on CD with case original album art, and your name on the sleeve
+ Bottle of unique craft beer made by the bassist to celebrate the album
+ Unique bracelet/wrist-band hand-made from our recycled guitar strings!
+ Entrance to album release celebration gig

*ONLY AVAILABLE TO UK and BARCELONA PLEDGERS

If we get 1200€, we can also pay the engineer of Atlántida studios to professionally mix the EP as well.

I'm an English musician living in Spain since 2010. I'm looking for help with my first professionally recorded album.

As I'm in Spain and will be leaving soon, I'm recording original compositions in Spanish, Catalán and el Espanglish! The songs are all inspired by the city of Barcelona, its culture, history, and the progressive struggles of its citizens. I've been heavily influence by the mestizo and rumba music I've heard here and, over the years, also by indie-reggae-folk y more recently hip-hop.

The album will be called; Buy Buy Barcelona, inspired by my work here as a tour guide and the documentary Bye Bye Barcelona.

I couldn't have found a better band to record with. We're called Algo Así... , or Something Like That... cos of our punky attitude to decision making.

From the other side of the world, we've got Pat Brenan bringing the swing on the drums. Pat's a Kiwi brother and also produces electronic music under the name: Russian Bass Program. 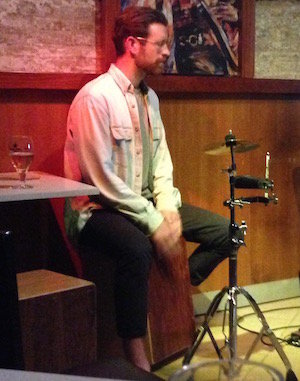 Adding a touch of class with the violín, we've got Zuzanna Nasidlak. Zuzanna is from Polond and trained classically before leaving for an orchestra tour of the US. You can hear her classic work here. 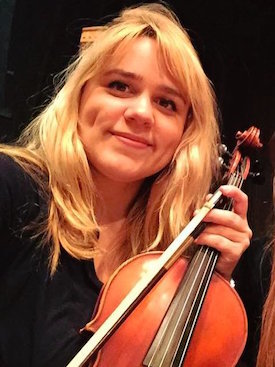 On the low tones we've got Martyn Lewis from, Weymouth. Lately Martyn's been digging afro-beat and soul. He's always got groove and you can hear his funky bass lines in our ex-grup It Sound Bang. 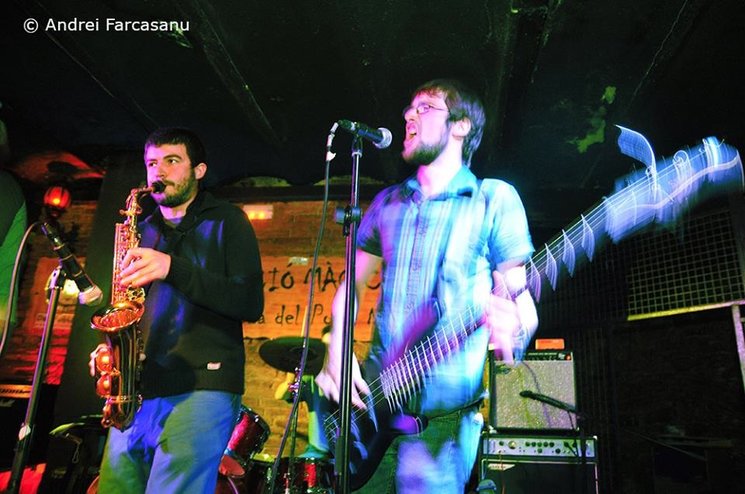 On some of the tunes our Madrileña friend, Lucía Olalla Gil, will be adding some awesome accordion, and on some the fantastic Joel Feeney will be laying down guitar licks.

Last but not least, our Guatemalteco amigo, El Chori, will be bringing percussion (Bongos y Congas). If you're in BCN you'll find El Chori all over the place, playing with different groups with a giant smile!

What are we gonna do with your money?

Most of the money is to pay for a professional quality studio. If you don't get a good recording, later there's nothing you can do in post-production to fix the project... you cannae polish a turd as they say!

We're going to La Atlántida Studio in the old industrial zone of Poble Nou (Once known as Nou-Manchester for it's cotton production!). A lot of fantastic local bands like; La Pegatina and Ocellot have recorded there. They've got great equipment and the engineer, Mario Patiño, is un puto crack (He's awesome)!

After recording the next biggest cost is mixing the tracks.

We're gonna get help from friends (I hope) to design the sleeves of the CDs and record some music videos for the tunes. We need to cover their costs.

For those who want CDs we need to pay to print them.

We'll be organising an album release concert in Barcelona (and maybe London). Anyone who has supported the project will get free entrance. If you ordered a CD version of the album we'll present them then (along with the beers and bracelets if you gave a big donation!).

We're looking at the end of May or early June to record.

Mixing will take at least a couple of weeks more, and then a few more weeks to get the CDs printed.

I hope to have everything finished by July and then have a big party with y'all :)

We record every rehearsal on a Zoom recorder and every week I stick these up on my Soundcloud page, please follow us and make comments/suggestions on there.

I've also got some solo guitar and vx recordings on my youtube channel. 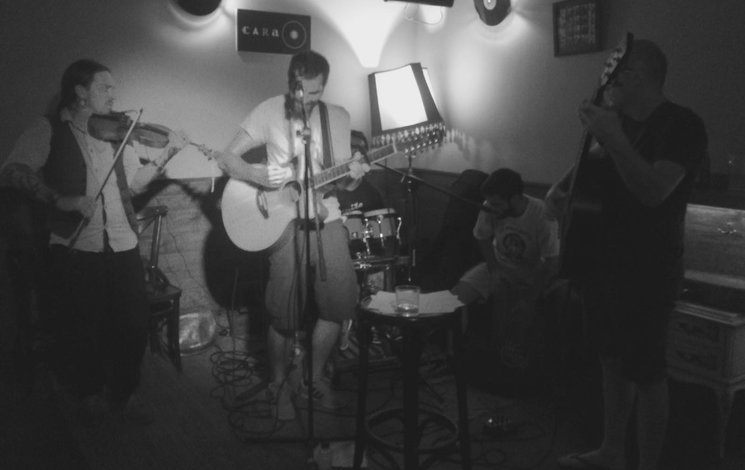 It's been a long time since the last post and apologies for that, things have rather slowed down with Pat's return to New Zealand. He finally finished the mixes and getting everything in the correct format at the end of last week. The tracks are now with Mario at la Atlántida Studios for mastering and he promised me the final mastered tracks by tomorrow :)

From there I still have to assign each one a unique digital fingerprint and get the disk and CD boxes printed up and delivered.

Yesterday I became a member of the PPL which, as far as I can tell allows me to issue my own digital fingerprints for any song I own the recording of... Some of you will know I've always considered Cold Ear Records a great name... perhaps I'm one step closer! But at the moment I'm lost if a world of copyright law, acronyms, and brain-ache. 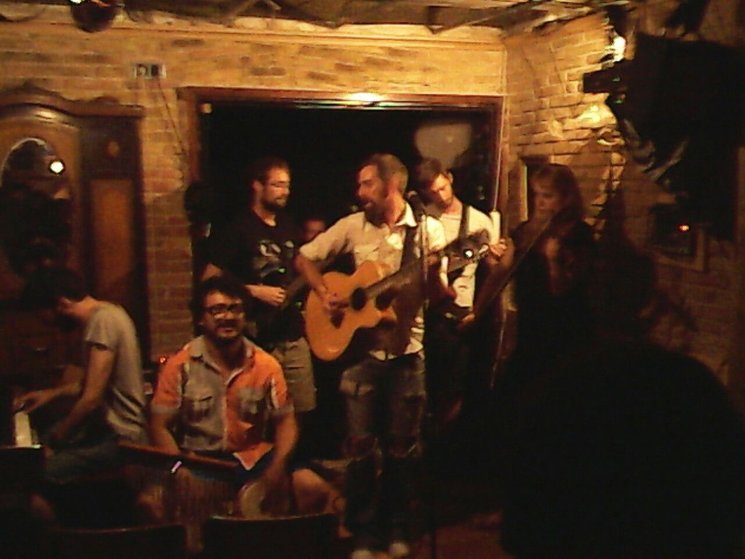 Apologies for the radio silence, we have been working on this but nothing major to report recently.

Our mix master extraordinaire, Pat, i-pad, Brennan is off back to hobbit land on Bastille Day so he's furiously twiddling knobs for the last weeks trying to get the mixes and some surprises finished. Mario at la Atlántida Studios has offered advice and Pat is trying to incorporate that before handing them all over the Mario for the Mastering.

Luke Watson who was designing our sleeve art has had a major set-back in his eye operation as has had to put the CD project on hold. My friend Cryssi who is a graphic designer and now exhibiting artist too, has very kindly stepped up and is getting involved. We still hope to use Luke's designs as he'd put so much effort into the project but this could delay the release date, although as yet I have no idea when that will be.

For English, scroll down... 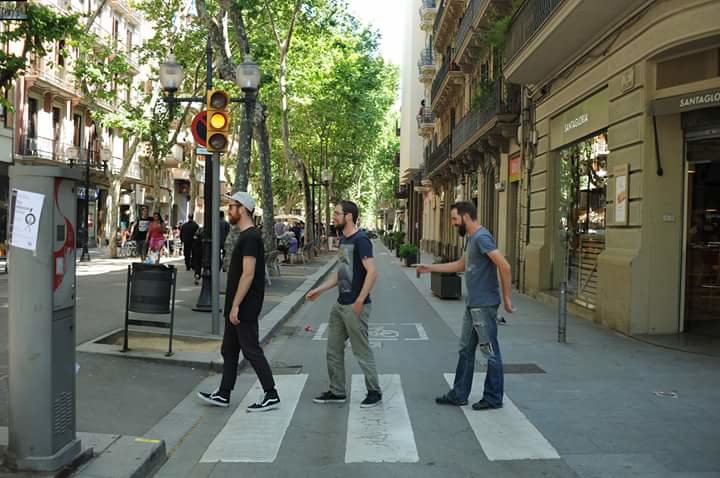 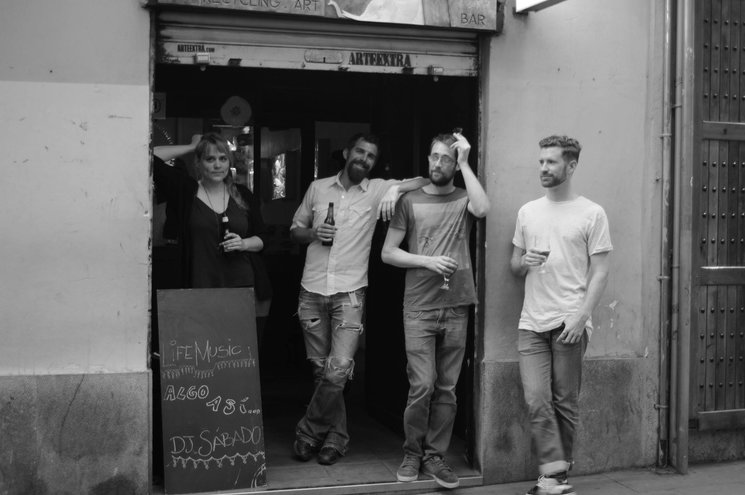 For English Scroll Down...

For English scroll down... 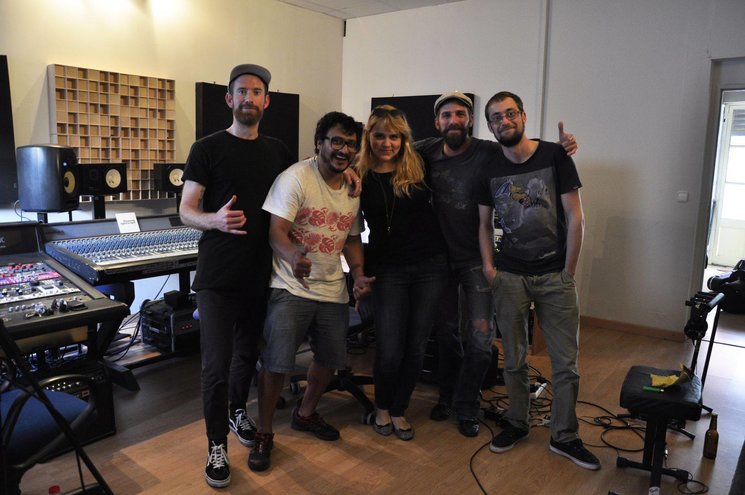 For English Scroll Down... 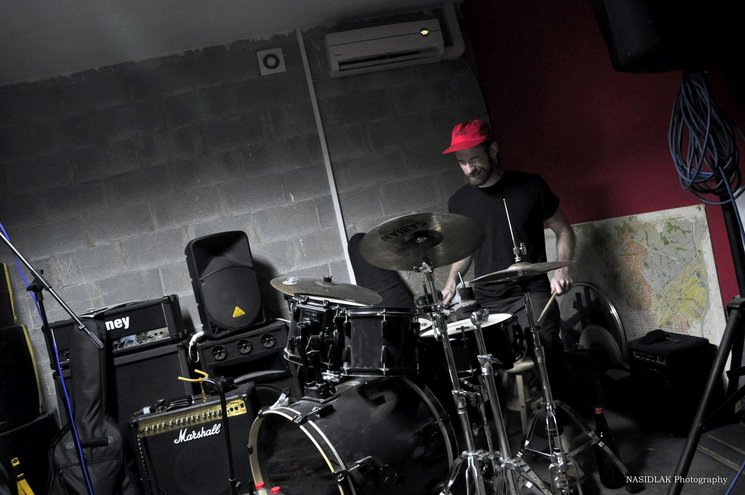 For English, scroll down :)

This week we added el Chori 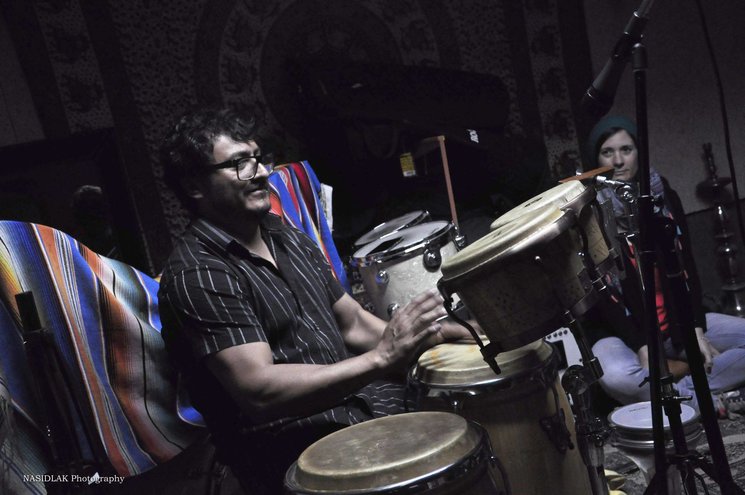 Chori is great and we're all really happy with him. You can hear the rehearsals here

We need to clean up the break in our cover of Que Volen Aquesta Gent and the Rambla song sounds a bit cheesy. We tried it more hip-hop and we're still trying out ideas on that one.

I confirmed the studio, now we just need to achieve our total on Verkami and vamos!

Mp3 copy of the first three songs on the EP.
+ Entrance to the EP release celebration gig

Full album on CD with case original album art, and your name on the sleeve
+ Bottle of unique craft beer made by the bassist to celebrate the album
+ Unique bracelet/wrist-band hand-made from our recycled guitar strings!
+ Entrance to album release celebration gig

*ONLY AVAILABLE TO UK and BARCELONA PLEDGERS