Deck of 40 cards showing personalities of science and arts, from ancient times to the present,classified according to the multiple intelligences theory

Aranjuez
This project ended June 05, 2016 without achieving its objective
0
seconds
9
Pledges
150€
From 2.000€
The link to the project has been copied to your clipboard

If you are interested in the cards but don´t want the printed version or you can print it on your own, we´ll send you the files on .jpg

Basic pack We´ll send you the deck of cards to the adress of your choice.

School pack To schools, libraries and all kinds of educational institutions we will send three samples of the deck of cards.

Sponsor pack In addition to the 3 decks included in the school pack, as a special sponsor of this initiative, your name, or your company or school or website will appear on the back of the box of the cards.

Is Albert Einstein more intelligent than Mother Teresa of Calcutta? What do they have in common personalities as diverse as Houdini, Bruce Lee or Michael Jackson? Are there different ways of being smart? In the end, what does being intelligent means?

In this deck of cards on Multiple Intelligences we introduce 40 personalities from the world of science, art and world history that offer a rich variety of examples of what it means to be intelligent and will enrich your understanding and appreciation of intelligence. 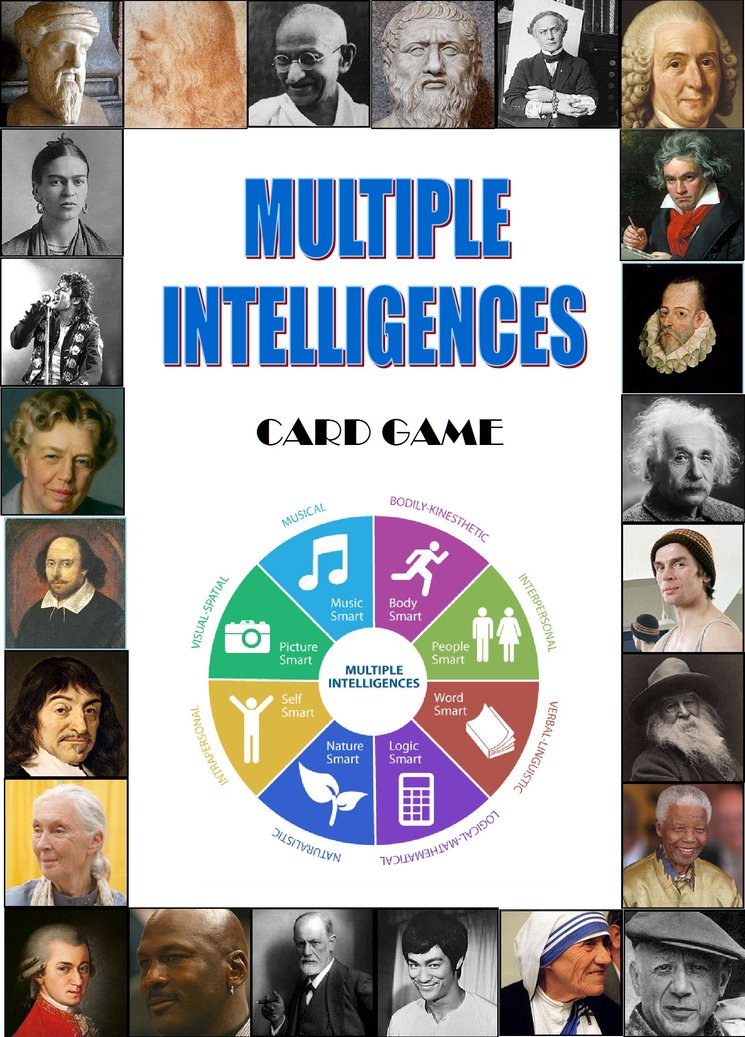 We usually associate intelligence to the development of mathematical-logic skills of individuals, embodied in the figure of physicist Albert Einstein, as a paradigm of intelligence. The purpose of this card game on types of intelligence is to offer students at all levels many other examples and ways of being intelligent beyond the intellectual-scientific model, which, however, is also included.

Following the theory about the types of intelligence by american psychologist Howard Gardner, we show examples of what is meant by logical, visual, interpersonal, intrapersonal, kinesthetic, naturalist, musical and linguistic intelligence. A total of 40 figures universally recognized of all ages, cultures, races, genders, nationalities and professions form a much wider mosaic on what being inteligent means, in which concepts such as empathy, perception, introspection and sensitivity in all its meanings are included.

These cards are clear and simple on purpose, so that its didactic application is as wide as possible, and so that can be used by students of various ages and levels to quickly get to know each of the proposed models.

For more basic levels the aim of the game could be to collect five cards of the same color (or type of intelligence). Thus with 40 cards up to 8 players can play. For more advanced levels it becomes important the exchange of information about each figure, its sentences or the dates of birth and death and correlate this data correctly

There is no single way to play with this deck, whose cards can be arranged in various ways (depending on the type of intelligence, or the chronological order), can be used as a starting point for further information or to discuss or reflect about the phrase that accompanies each image, which is particularly representative of their point of view.

Note that this deck is designed more as a teaching tool than as a board game itself with its unique rules, so it is open to as many uses as you can imagine 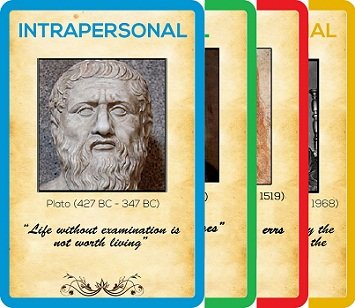 Important: We will publish two editions of this deck, in spanish and english. Please specify which one you want.

The reward is the deck itself, that you can choose to receive in digital format by email or printed and sended by traditional mail, one or more copies as requested or, if desired, sponsored by you or your website. The number of printed cards that we will be editing is limited and shipments will be made within the spanish national territory. The digital version, in .jpg format, however, has no limits or boundaries.

You can find more information and make any questions, comments or suggestions on the blog http://alfabasi.blogspot.com.es/

If you are interested in the cards but don´t want the printed version or you can print it on your own, we´ll send you the files on .jpg

Basic pack We´ll send you the deck of cards to the adress of your choice.

School pack To schools, libraries and all kinds of educational institutions we will send three samples of the deck of cards.

Sponsor pack In addition to the 3 decks included in the school pack, as a special sponsor of this initiative, your name, or your company or school or website will appear on the back of the box of the cards.