A book for Charles Burnett, cult filmmaker of 'Killer of Sheep'

We want to publish the first monograph entirely dedicated to Charles Burnett, considered one of the best independent filmmakers in the States. We have interviewed him in Los Angeles and we count on a few committed collaborators to write about his cinema. But we need your help to finance the project.

A digital copy of the book.
+ Your name in the acknowledgements.

Official sponsorship, with your logo printed on the book’s cover.

Whether you are a cinephile or no, most likely you’ve never heard of Charles Burnett. If we say to you, KILLER OF SHEEP, maybe that will ring more of a bell. It should. If we go over the list of film titles marked “culturally, historically, or esthetically significant and worthy of preservation” in the US Library of Congress, we will find this among the first ones included. Listen, if there were a nuclear holocaust tomorrow, Charles Burnett’s body of work is one we would take with us down into the bunker.

Filmed in the neighborhood of Watts (Los Angeles) in the mid-1970’s, this cult film is the most significant representation of the L.A. Rebellion, a movement of African-American directors who worked in that period to make pieces that reflected their daily life, combating the racist clichés of Hollywood. The portrait of a working-class family, KILLER OF SHEEP has been frequently considered a pure example of North American Neorealism.

After this film, which remains its creator’s most popular one to date, having made a masterpiece at such an early age; nonetheless, Burnett, considered by many the greatest African American director in history, directed several more films in the same line. MY BROTHER'S WEDDING, WHEN IT RAINS, and TO SLEEP WITH ANGER –– a prizewinner at Sundance, with Danny Glover in the role of his career –– are just a few examples.

A jazz and blues aficionado, he was chosen by Martin Scorsese to direct the episode of his series The Blues focusing on the Mississippi Delta. His body of work has been repeatedly praised by critics such as Jonathan Rosenbaum, who said of him: “I think a strong case can be made that Charles Burnett is the most gifted and important black filmmaker this country has ever had.” And yet, though they were uttered by the God of American film critics, it seems these words have had little effect. 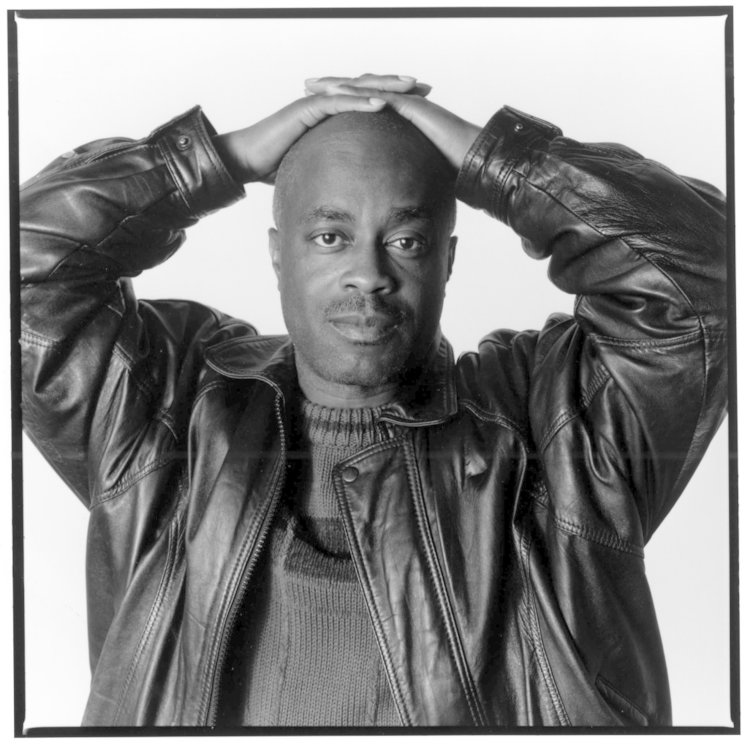 We are writing a book and we need your help

As of today, Charles Burnett remains unknown to most people. We would like his name and work to receive the recognition they are due. For this reason, we went to Los Angeles to interview him, and we are hoping to publish a monograph about him, comprising this interview and various articles by critics, journalists, and academics who are experts in his work.

The book will have two editions, one in English and another one in Spanish. You can choose the one you prefer.

Its structure will be the following:

The interview is done, as we were able to get sufficient financing for the trip to Los Angeles thanks to the support of two of our collaborators: AGADIC, the Galician Agency of Cultural Industries, and TABAKALERA, the International Center of Contemporary Culture. But we still need another push to make this happen, and that is why we are asking for your help.

How you can contribute to the project

We want to share with you the expenses this project has incurred or will incur:

Remuneration to the researchers, programmers, and journalists for their articles

The book is edited by Shangrila in conjunction with the festival Play-Doc, which has already managed to finance part of the project with the help of its collaborators, but your help is essential to get the rest. Right now, we need €5,500 so that this project can see the light of day. 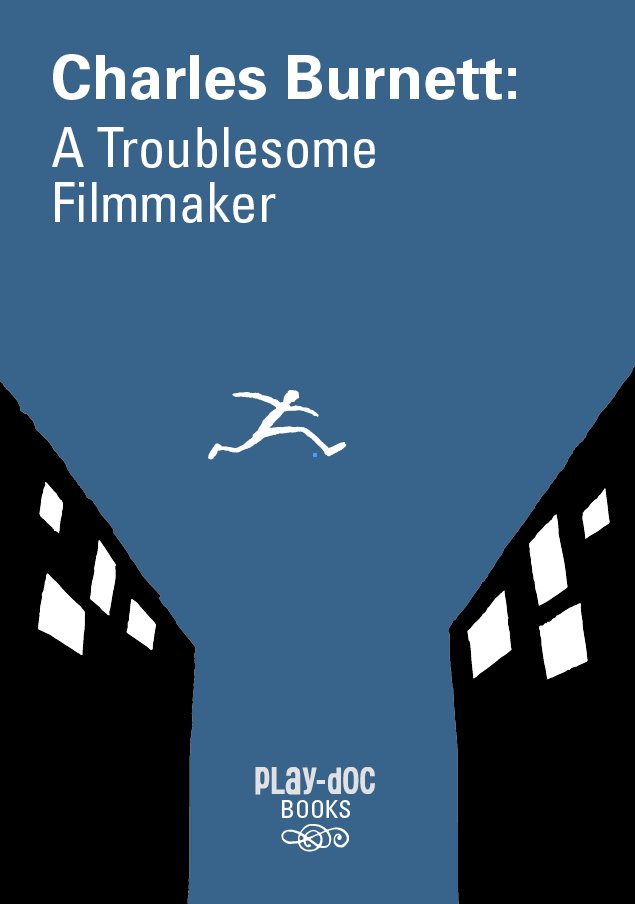 Your pledges will allow you to be among the firsts to receive the book. Besides, many of the rewards include a volume signed by Charles Burnett, with a personal message for you.

Other rewards include merchandising material of the festival, with this campaign's exclusive design. We encourage you to visit the festival from April 13 to April 17. Come and discover with us the cinema of Charles Burnett. Many of the rewards will grant you a full-access to the festival. The filmmaker will be present to introduce his films to the audience, many of which you can watch at your place by supporting us with a 150 euros reward. This one includes a DVD pack with his most emblematic films that he will sign specially for you.

Finally, if you are part of an enterprise, association or institution and you want to support the project through one of these companies or collectives, you can become our sponsor and your logo will appear on the back cover of the book.

There are rewards for every taste. Choose yours.

The book is under production. We intend to print it around March 15.

The rewards will be sent from April 13 onwards as this is the date when the festival begins, where the presentation of the book will take place. 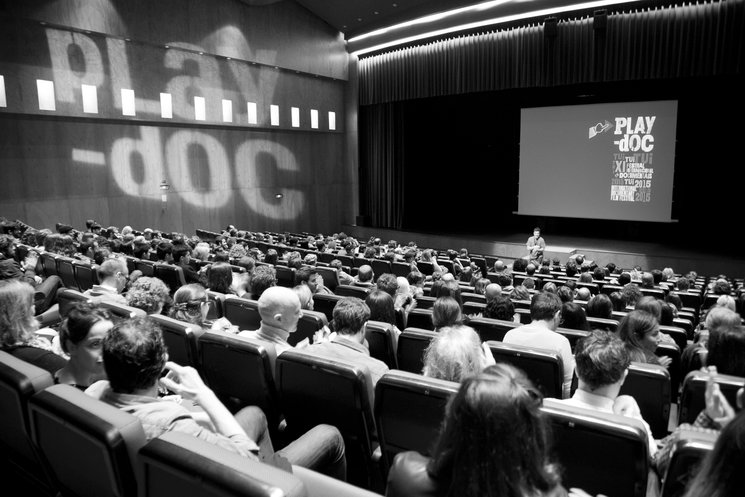 Play-Doc, an independent film festival that takes place in the ancient and beautiful city of Tui, Galicia, northwest of Spain, right on the border with Portugal.

Although small, we have built a unique and outstanding festival, with a very special atmosphere and a large, warm and welcoming audience. Over these past years we have had here worldwide acclaimed filmmakers we love, such as Albert Maysles, Artavazd Pelechian, Ross McElwee, Raymond Depardon, Bogdan Dziworski, Victor Kossakovsky, Claire Simon, Lech Kowalski or Marcel Lozinski, among many others.

Play-Doc also offers seminars, workshops and live concerts, and has its own cable channel, Play-Doc TV.

Play-Doc is one of the most important documentary film festivals in Spain. The 12th edition will take place from 13-17 April, 2016. 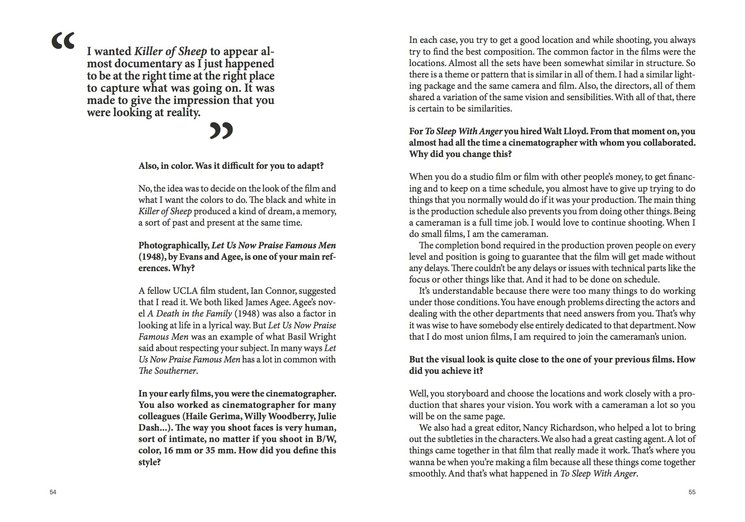 This is how the interview will look like in our book. You can read above an excerpt from it. Below, two pages from the Spanish version of the chapter 'On location'. Design by Calpurnio. Thoughts? 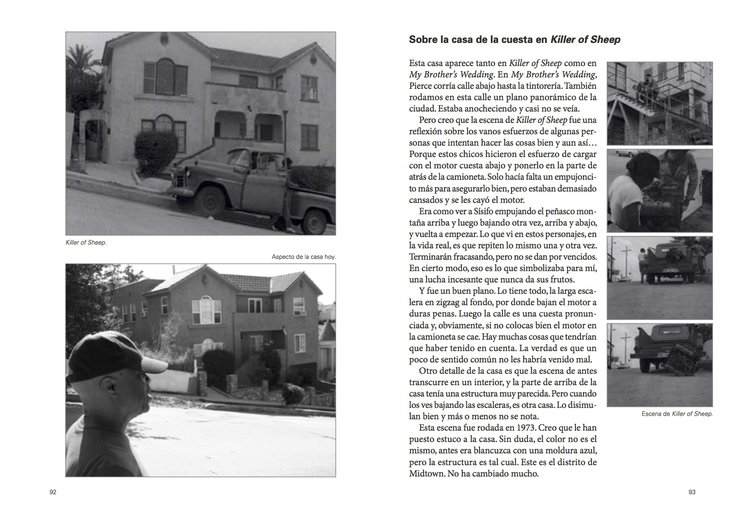 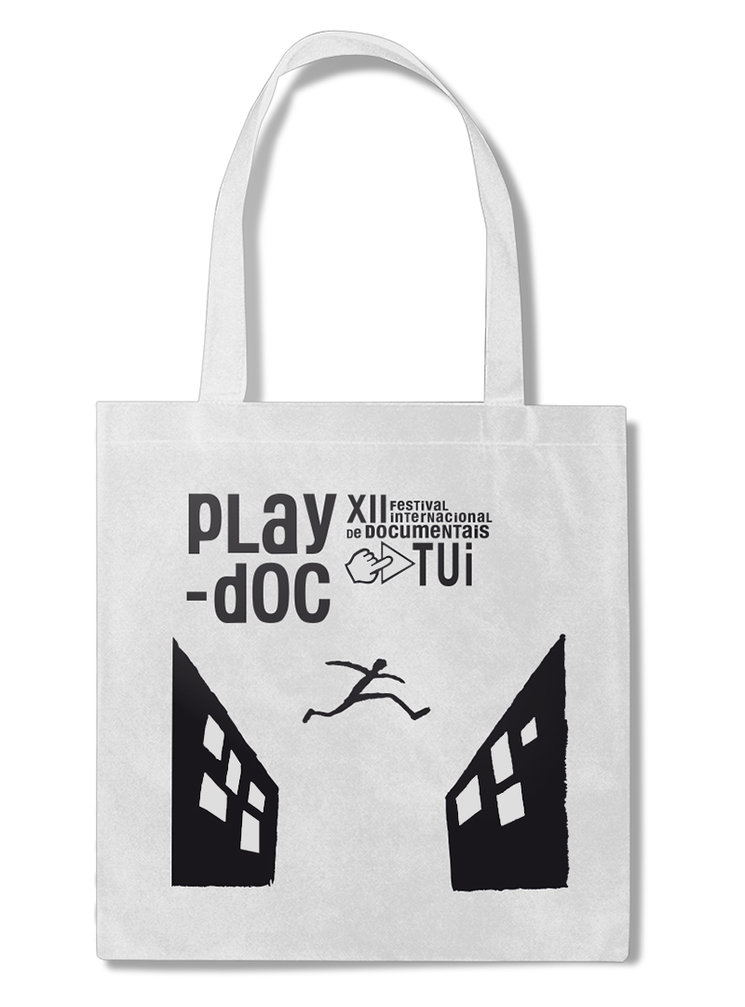 This is the aspect that will have our bags of the 2016 edition of the festival. If you want one, we have added a couple of pledges with them. These are: 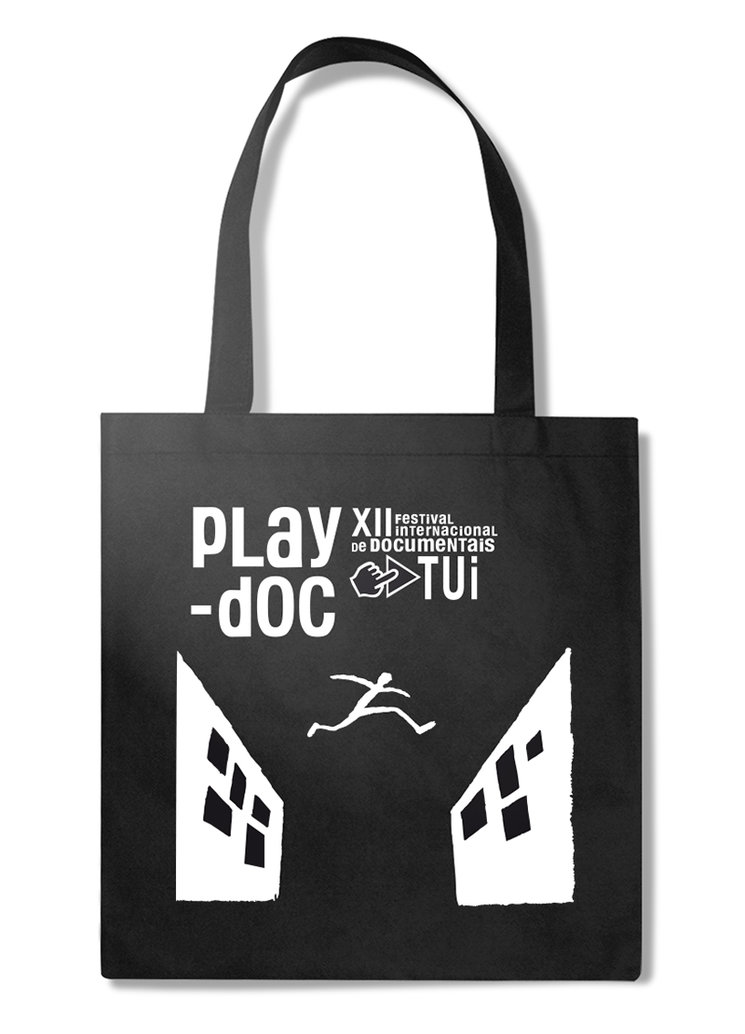 Last October we had the chance of visiting some of the locations where Charles Burnett shot his films in Midtown and South Central Los Angeles. He gave us a tour, explaining why he chose these places and what they meant to him. This will be a chapter of our book Charles Burnett: a Troublesome Property so we have decided to give you a glimpse into those pages by uploading a video of the interview. Check it out.

We have noticed you love the DVD packs, as we are running out of them. We have had a couple of questions about them as well, so here you got a brief description of the contents:

Please notice that this is a NTSC pack, not PAL. English language spoken with English subtitles (no Spanish subtitles available, sorry).

We could spend hours talking about Charles Burnett's cinema, but we will simply use some words by Mr. White today to convince you that he is a great filmmaker (in case you didn’t know):

《 Here's something first-time viewers of Killer of Sheep… read more 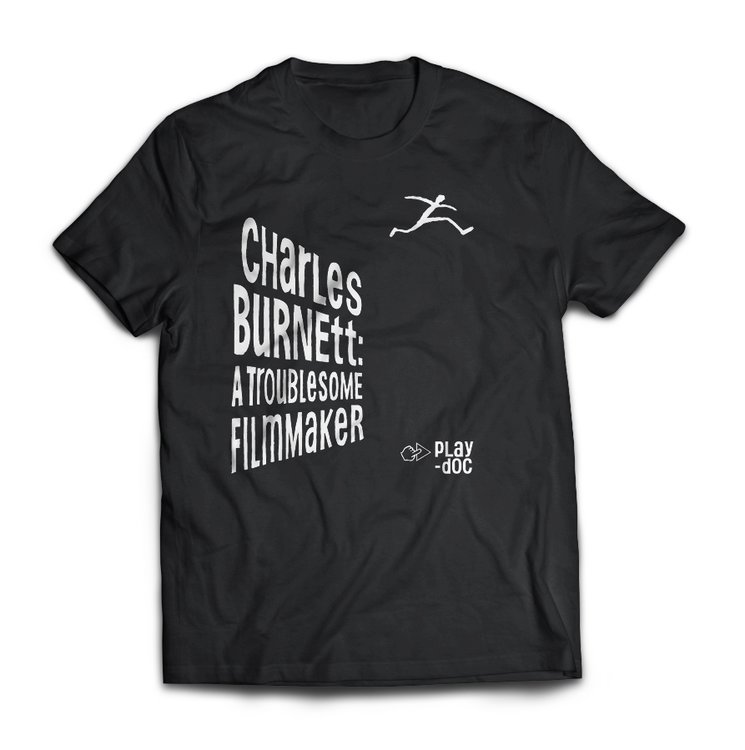 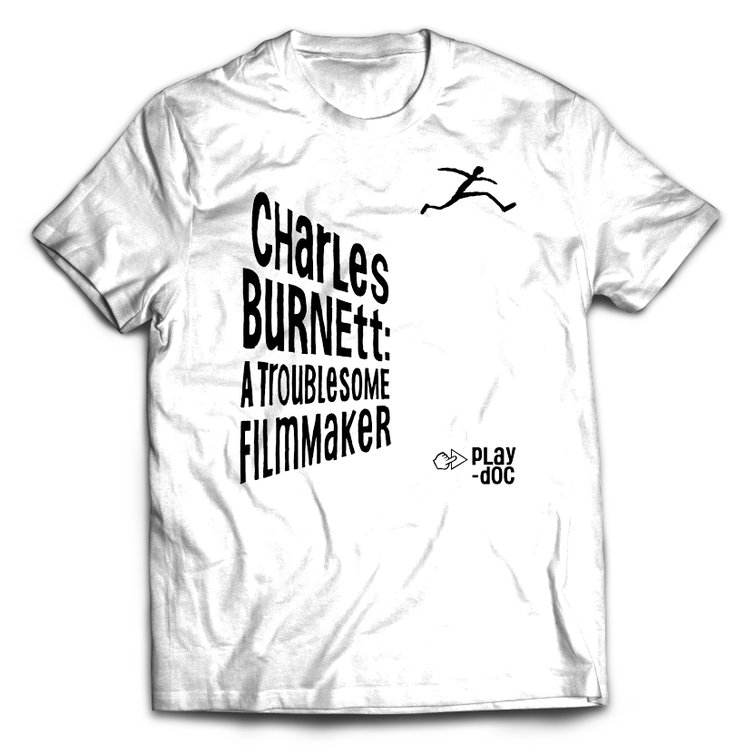 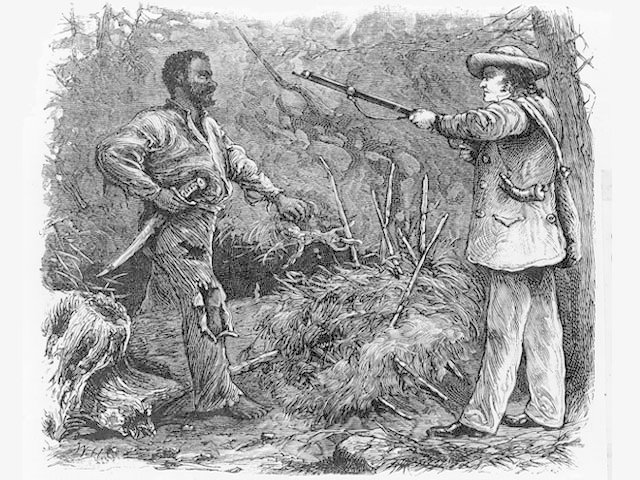 Some of you may be wondering about the title of this book. Charles Burnett: a Troublesome Filmmaker? Isn't that negative? Not necesserily. First of all, you first should know that Burnett directed a film called Nat Turner: a Troublesome Property in 2003. This is a documentary piece about a real "revolutionary", so to say, that lived as a slave in Virginia until he decided to revolt against his masters in 1831. His organised insurrection caused the death of 55 enslavers in his attempt of liberating fellow slaves in the area. This may ring a bell, as recently Nate Parker won at the Sundance film festival several prizes with The Birth of a Nation, about the same topic.

Burnett's approaches are very different. This one being a very controversial historical figure, he knew it would be impossible… read more

A digital copy of the book.
+ Your name in the acknowledgements.

Official sponsorship, with your logo printed on the book’s cover.