Ninth release of the craziest comic and illustration book of the barcelonian jungle. A platform for amateur and professional illustrators to collaborate, share and publish their own work. Do you like comic books? Check “Licor Del Mono” out!

Barcelona
This project ended March 21, 2015 without achieving its objective
0
seconds
18
Pledges
585€
From 3.500€
The link to the project has been copied to your clipboard

Our little project was such a cutie at the beginning… It would walk around its cage in diapers, thinking of himself as the King of the jungle. Nothing was good enough for our sweet little prince. Time went by though, and it grew and grew. And it changed the diapers for a more “au naturel” style. It left its baby bottle and grabbed the liquor one. It became stronger, wiser and way hungrier. Now the cage isn’t big enough for it and as a pre-teen he is hearing the jungle’s call so he howls like a possessed wolf. We would love to take it out to the world, visit places and more, but we cannot cover all its needs. It also bites sometimes.

That’s why we’re on the look of intrepid art-lovers who would collaborate to help us release the 9th special edition. We need some kind of Jane Goodall, or anyone really who digs our

Licor del Mono was born from the minds of a multiskilled pack of hominids incredibly curious and proactive. We have had many projects in our hands, but Licor del Mono Magazine is by far our favorite one. An annual printed edition in which we gather and collect our best artwork as well as our external collaborator’s.

The period of inscription for authors to join the project is already open in our web until the February 22nd!

How is going to be the number 9?

This edition is going to be the most savage one: 100 pages of 15x35 cm, full color. We want to reach 500 units that will include a bookmark, a sticker and also the awesome anaglyphic 3D goggles to leave your eyes tripping.

What are the donations for?

Almost all of them will be used to the book’s printing, with the best materials and quality available and with the added value that’s always expected from previous “Licor del Mono” editions.

Part of the collected donations will be destinated to promotion and advertising of the book, as to strenghen the commercial relation between Licor del Mono and local bookstores and specialized media.

All rewards include a mention within the book and in the official Licor del Mono website on the Sponsors section.

4€ - extra mention within the book 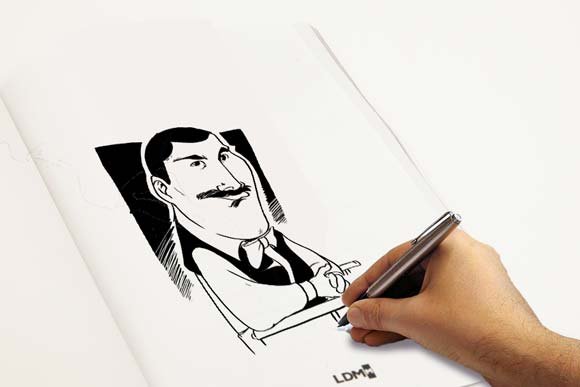 Having a Licor del Mono is nice but getting it with a special signature is more than awesome! Saing so, you trust us so let our monkeys make a special design for your book!

You’ll be featured in our book and in the website too, but also we’ll secretly get a tattoo of your name in an intimate part of our body. You won’t see it because we wear clothes when being on the street. Sometimes. 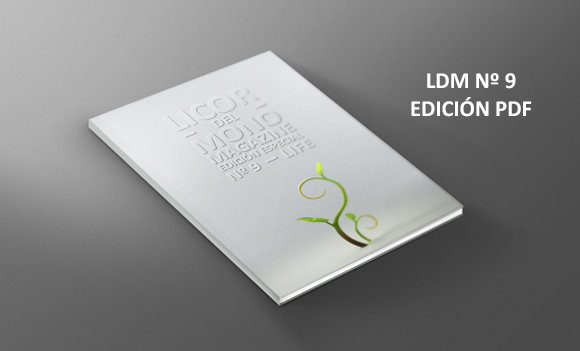 You’ll have a Licor del Mono without your mum/dad/couple or cellmate getting angry at you for storing a shit ton of stuff in your room.

If you’re out of the country we’re happy for you and that’s why we will send you the reward as far as our delivery boys will take it. 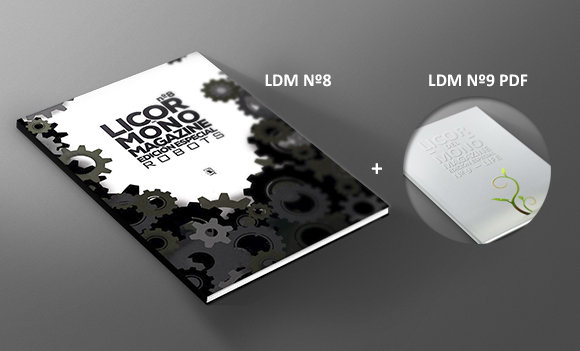 Benefit: When we become incredibly famous and successful, you will be able to brag; “I have Licor del Mono editions from way before they became mainstream”. Cool huh? 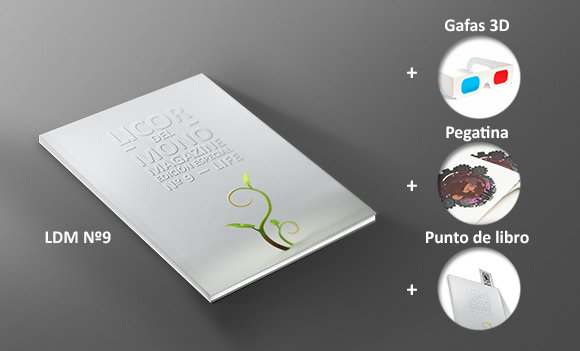 Great technology and all that bullshit, but stickers will ALWAYS rule. They are beyond fashion. And the bookmark will give it a sexy touch. 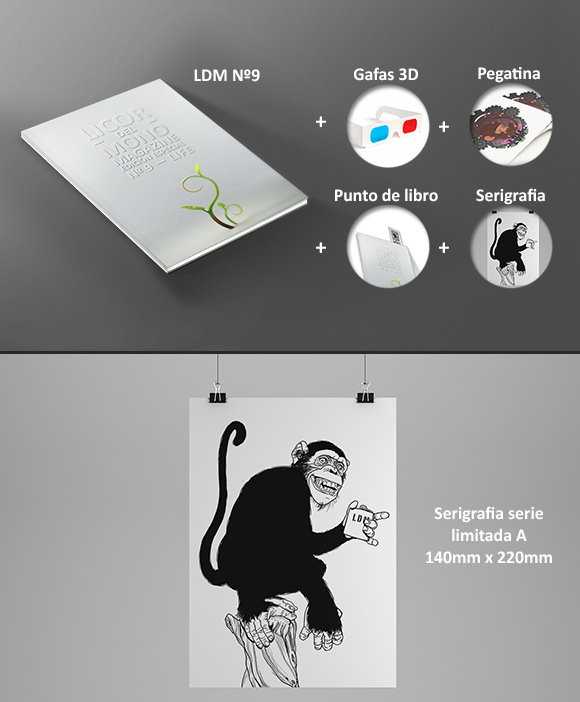 That white piece of Wall in your room makes you nervious? We’ll send you a pretty cool poster so you can cover it. 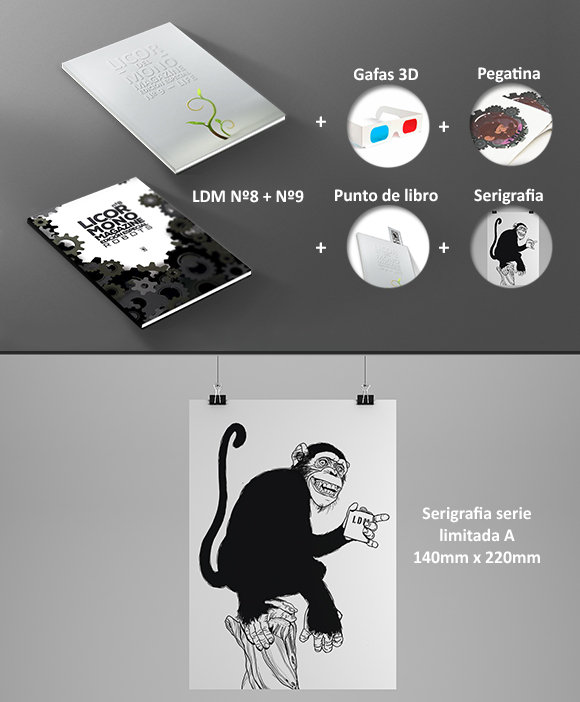 We only ask you to have an energetic drink ready for when the delivery man arrives. He’ll be dead tired for carrying all the amount of stuff around! 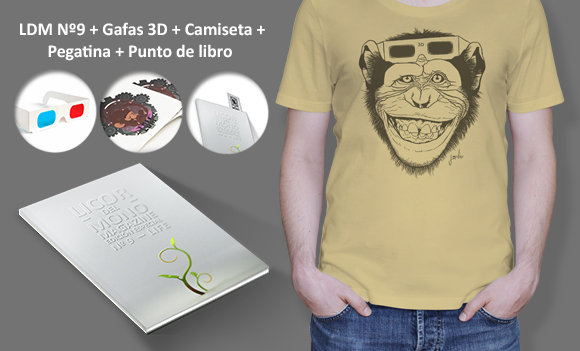 If you go on the streets rocking our t-shirt, with the Licor del Mono edition in your hands & the bookmark properly placed in it, and the sticker in your forehead, the planets will align and an hominid revolution will take place instantly, delivering unexpected results. Well, that might not happen. Who knows though. 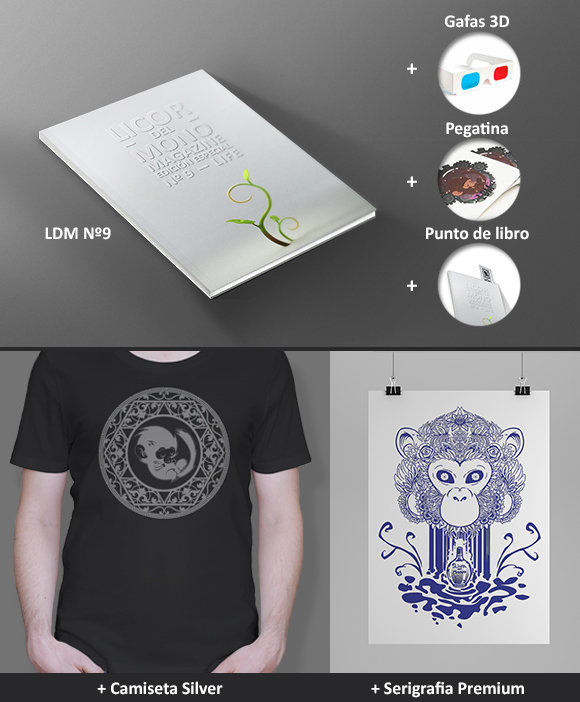 If you’re into collecting stuff and you’ve always wanted exclusivity, this pack will bring you the most interesting stuff from LDM. 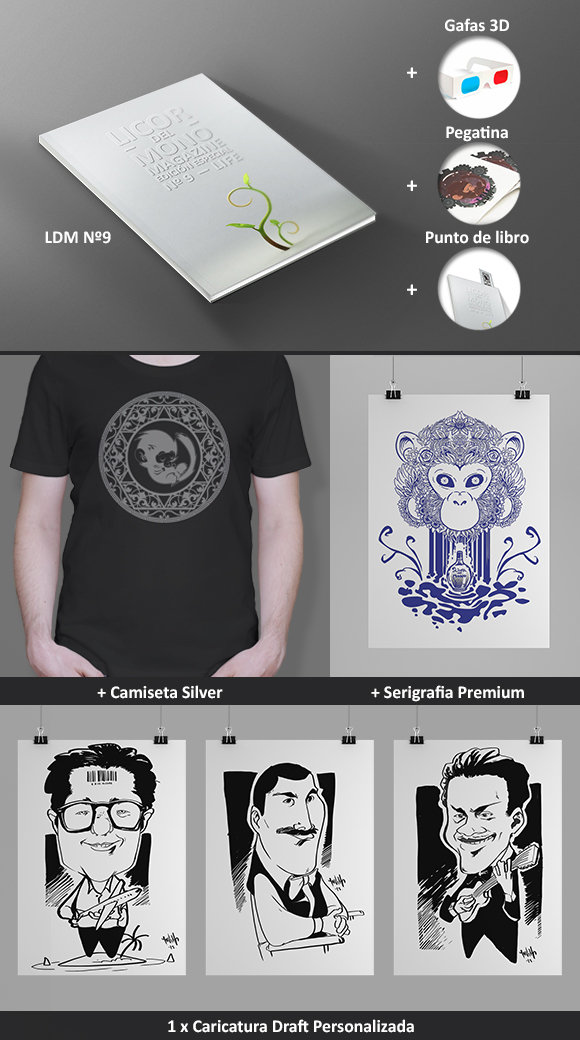 Are you cartoonish? Have you ever said “cartoonish” three times in a row? Wait that’s not the point.. A draft caricature is a cartoon drawing of your face made with ink and a lot of talent. Final result? LOL 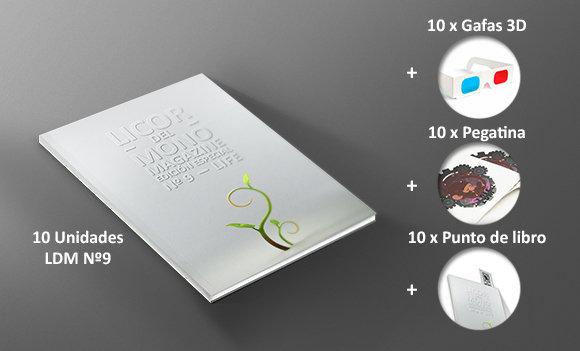 From now on do not give away socks or ties as Christmas presents… give your family and friends a LDM Magazine. They will like you way better!

The Harvard diploma hanging on your wall is no longer fashionable. It is way better a 50x50cm caricature made by one of the LDM artist. Can’t compete.

Thanks for believing in us. Let’s grow together! (The monkey has no fleas, we promise)

Nothing else to say. But there’s a prediction we can make. The english dictionary will add a photo of the party next to the word “epic”.

We’ll be in Verkami until March 22nd, and 10 days later we plan to start printing our asses out. The magazine production will take place between March and April 2015. Our mission is to be in time for the 33º Salón del Cómic de Barcelona, release the Monkey there and get wild!

The rewards will be given away on April 16th to the fans that come by our stand in the Salón del Cómic de Barcelona, and on April 19th the ones that require international or national shipping.

The edition of the 9th book is a live project that’s being developed throughout the year, that’s why the final product may vary from the designs and illustrations that appear in this page.

The content of the book is published exclusively in Spanish.